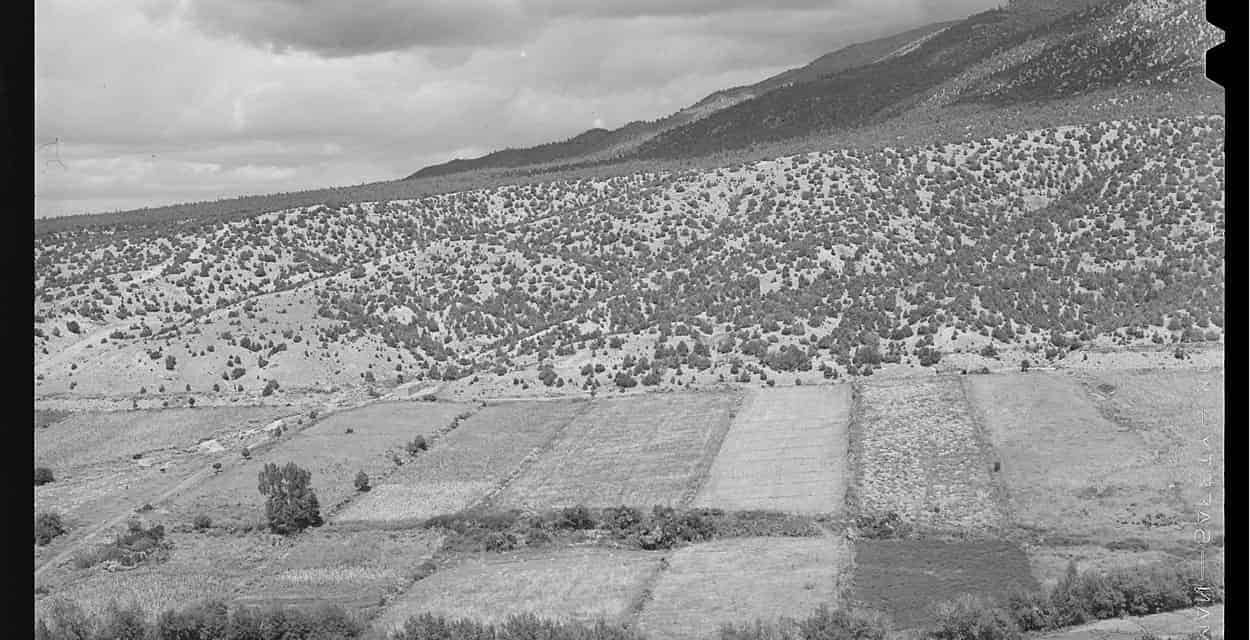 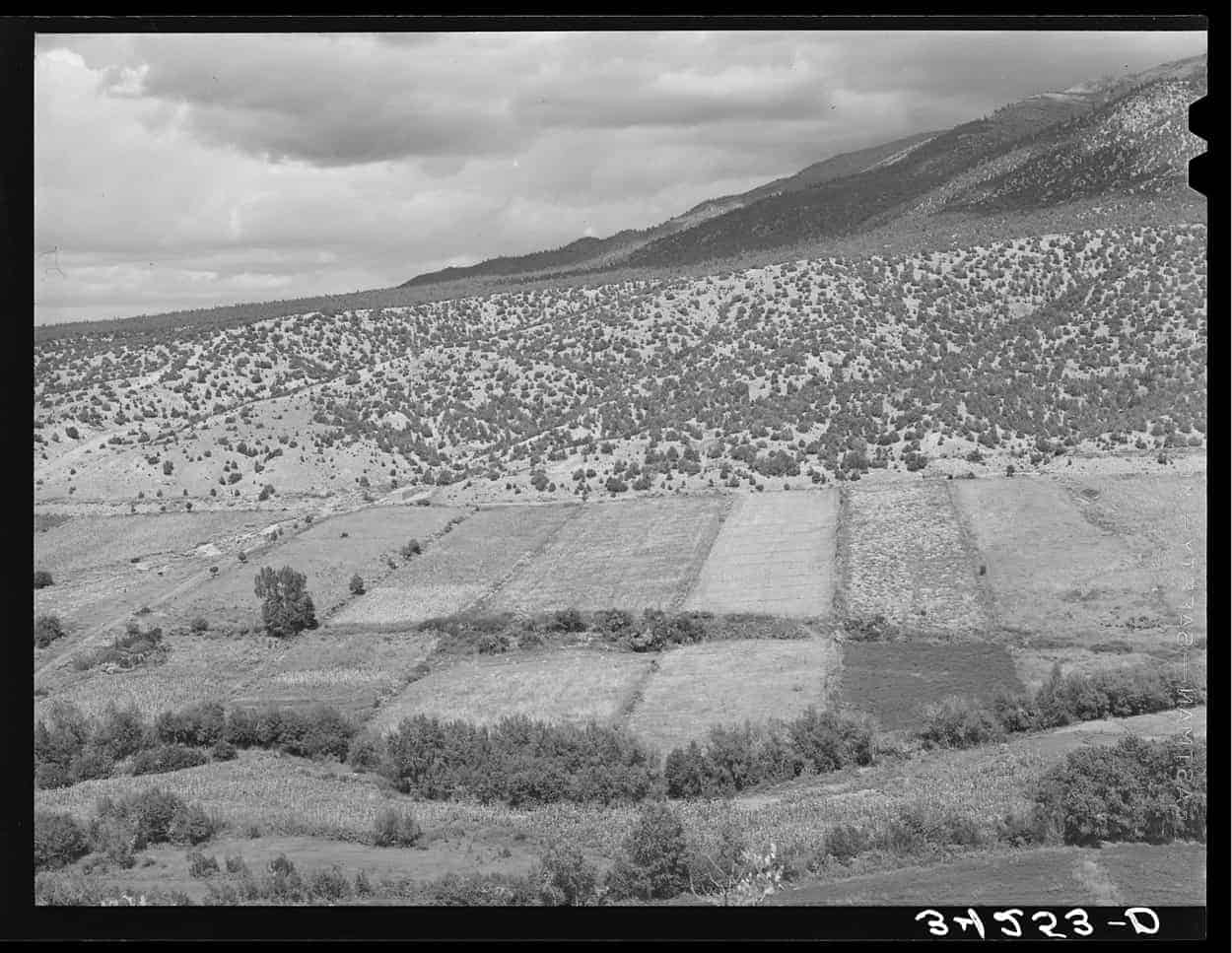 “Scene on strip farms along the Rio Hondo near Taos, New Mexico. This land was originally Spanish land grants and has been divided and subdivided among the descendents [sic] of the first farmers until the farms are today extremely small, some being only five or six acres. The land has been divided so that each has part of the fertile valley and part of the hilly country.” Russell Lee, 1939, courtesy Library of Congress, Prints & Photographs Division, Farm Security Administration/Office of War Information Black-and-White Negatives.

Travelers driving through New Mexico’s villages have long admired the quaint homes, ancient plazas, modest orchards, and verdant fields. Juxtaposed to the rolling arid hills, these orchards and fields are the emerald and more serene remnants of a colonialism that the Spanish negotiated with the Native tribes of the region. Arabic acequia engineering was transposed on Puebloan ditches, and colonists expanded these irrigation systems to create improbably sustainable communities that to this day look like green islands on the sea of highland desert. If parciantes were to stop irrigating these fields and orchards, the riparian area would die and the native chamisa and cactus would return and take back the landscape they have lost to orchards, timothy, and alfalfa.

Nearly every one of these old villages and their fields was born out of land grants, petitioned for by would-be settlers and granted by the Spanish crown through their New World representatives, typically the governor. In the century and a quarter after the Pueblo Revolt of 1680, Spain granted about one hundred thirty land grants, or mercedes, to both individuals and communities, including grants that recognized the property rights of Pueblo communities, an attempt to discourage incursion on Pueblo lands and stave off another rebellion. After Mexico won independence in 1821, Mexico continued this tradition, granting larger grants (nearly three times the size of Spanish grants) for submarginal lands further from the Rio Grande and its tributaries. All of these grants (community, private, and Pueblo) were made of a combination of small private tracts that included the sitios and suertes holding homesites and gardens and the communal lands that contained the townsites, churches, forests, hunting, and grazing lands that comprised the bulk of a land grant. Mercedes, at least theoretically, contained enough land and water, and enough variation in types of land, that their communities could provide for themselves with the waters, pastures, and forests contained within.

Maintaining a community and sharing resources was difficult. Acequia irrigation practices, grazing, hunting, and wood hauling were done communally, and villages would often feud over resources, especially water. Anyone who has gardened in New Mexico’s high-desert climate can attest to the brutal heat of the summer and equally harsh winters. Early colonists described the annual climate as “nueve meses de invierno, tres de infierno,” or “nine months of winter, three of hell.” Drought was common, as were late spring frosts and early snowfalls. The arid climate made agriculture challenging, and the population vulnerable to starvation and disease—which, combined with raids by surrounding tribes, made life on the frontier difficult. Colonists imitated their Pueblo neighbors’ cultivation of corn, beans, and squash, and added stone-fruits, wheat, lamb, and beef to the Pueblo diet. Across centuries, the populations created foodways built on crops that were hearty and drought tolerant.

Today, land grant communities have a complicated relationship with agriculture, to say the least. Many factors led to this. Foremost was the dispossession of land grant heirs by attorneys, land speculators, and politicians who’d coveted the limited arable land that heirs and their Pueblo neighbors and cousins owned. After their land development schemes failed, speculators found an enthusiastic purchaser in the federal government. Initially, the government purchased former land grant common land under the auspices of federal programs that sought to allow villagers to access the resources that constituted their former communal patrimony. Instead, these lands became a part of the national forest system and heirs were denied access to lands that they had relied on to hunt, gather food and medicinal herbs, and graze their stock. Today nearly a quarter of the Kit Carson and Santa Fe National Forests are former land grant common land.

Capitalism also changed how villagers interacted with the land around them. With the advent of railroads, New Mexico’s isolation truly ended and its fields were opened up or exposed to regional markets. Lands that in 1870 supported 30,000 cattle and 350,000 sheep and goats were suffocated by 150,000 cattle and 1.6 million sheep and goats by 1900. Piñón, long a source of protein and fat for Pueblo peoples and Hispanos, was now harvested commercially, and caretas (carts) loaded with sacks of piñón were a common sight at railroad stations, from which they were shipped north to markets in Colorado. In the lowlands, irrigation districts were formed, imposing taxes and fees on land that barely provided for a limited subsistence agriculture. The formerly poor but independent villagers were now dependent wage earners, still poor, but indebted to mercantiles where they purchased dry goods to replace the food they once grew. And while the availability of dry goods increased food security and reduced the likelihood of shortages, it demanded that villagers become wage earners, which gradually led them from their villages to trade centers. Their tastes changed and became more conventional as they substituted traditional drinks like atole (a warm corn-flour drink) with coffee, replacing what they had formerly produced or bartered for with items they needed to buy. 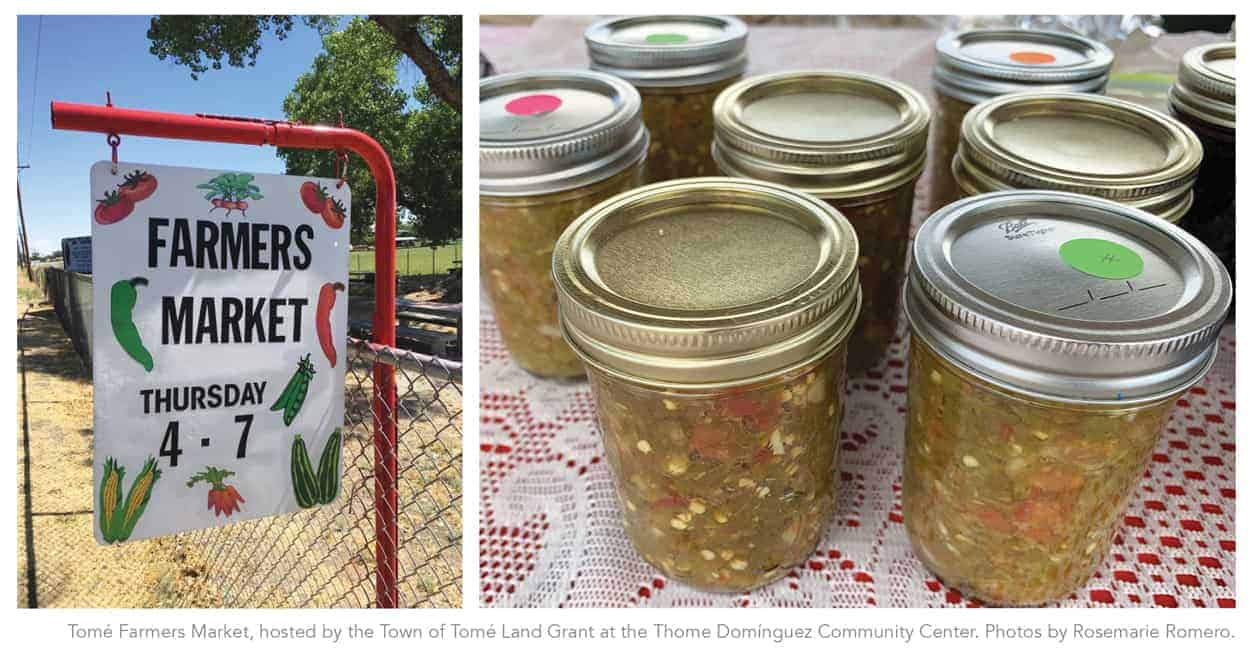 Finally, the natural constraints imposed by a high-desert climate limited the amount of arable land, as there was only so much water available for agriculture. Partible inheritance led to the continual division of land, generation after generation, and grazing and garden plots shrunk. When land grant village populations boomed in the nineteenth century, this combination of push and pull factors (dispossession, capitalism, and environmental limits) led them away from their villages and their traditional agricultural economies. But as land grant heirs moved to commercial centers, they brought their foodways and culinary traditions with them.

Heirs still in their villages, along with many that relocated, continued growing small plots of corn, beans, squash, chile, and peas. Those far from reliable waterways relied more heavily on stock raising and dry farming (in Spanish called temporal) to provide for their families. Generations after they became wage earners, Hispanos continued maintaining garden plots or grazing a few dozen head of cattle or sheep. My grandparents’ and parents’ generations (born between 1900 and 1940) held government jobs during the day and hurried home to their fields in the evenings, where they augmented their modest wages with homegrown crops. Families exchanged fresh apples, apricots, and plums, and picked wild chokecherries (capulín) and plums (cirhuela) which they dried or made into jellies and jams.

Subsequent generations by and large abandoned these practices in favor of job security. Hope remains that traditional agriculture will be maintained in land grant communities. Many villages’ plunging population figures have plateaued, and some have even experienced modest growth. The days of communal fields are long gone, save an ephemeral community garden here and there, but land grants are still engaged in traditional lifeways, especially grazing and stock raising for those grants that do retain some communal land. Stock raisers also possess allotments on forest lands, allowing them to grow hay, timothy, and alfalfa on their winter grazing fields, which they bale and feed their herds for as least part of the winter. Communal grazing still takes place on both the Abiquiú Land Grant and the Chililí Land Grant, among others. Chililí and Abiquiú converted to livestock cooperatives in the 1940s to stave off dispossession at the hands of the State Tax Commission. The Chililí dissolved the cooperative and transferred the lands back to the grant in the late 1980s, and Abiquiú followed suit in the early 2000s.

Since 2002, land grants have been political subdivisions of the state with duly elected, voluntary boards of trustees. They represent the modern iteration of the most ancient form of democratic local governance in New Mexico. The Tajique and Town of Tomé Land Grant operate local community centers, where the Town of Tomé Land Grant hosts a weekly farmers market. Sisters Andrea Padilla and Rita Padilla-Gutierrez have both served on the Town of Tomé board, and volunteer countless hours, organizing the market while raising cattle and growing hay on fields passed down for generations. Higinia (Valdez) Gallegos of Cañones has been active on the Juan Bautista Baldés Land Grant, serving as president for most of the last decade. With her husband Wilfredo, she received a grant to construct hoop houses, extending the growing season in the micro-basins of the grant and providing fresh vegetables to the local preschool and nearby elementary.

For more than a decade, land grants have engaged in discussions with the New Mexico Congressional delegation to create legislation that recognizes traditional uses of forest resources, including medicinal herbs, foods, and forest products, and allows the maintenance of acequia infrastructure on US Forest Service and Bureau of Land Management lands. This past July, congressman Ben Ray Luján re-introduced the Land Grant and Acequia Traditional Use Recognition and Consultation Act (H.R. 3682), an important step in restoring meaningful access to land grant communities. Land grant boards have also collaborated with the Forest Service on the Collaborative Forest Restoration Program, investing time and resources into public lands that once constituted their commons. Amendments in the 2018 Farm Bill made both land grants and acequias eligible for federal programs like the Environmental Quality Incentive Program (EQIP), which hopefully will lead to the restoration of waterways and riparian areas in land grant communities.

Land grants have made strides at the state level. As political subdivisions of the State of New Mexico, land grants are eligible for state funding. The Interim Land Grant Committee was established in 2003 and has aided the return of lands to the Abiquiú, Tomé, and Tierra Amarilla Grants. Since 2009, the New Mexico Land Grant Council has provided a program of support for land grants, advocating the creation of constructive state and federal legislation and seeking the return of common lands to land grants. Land grants are unlikely to return to the agrarian villages that they were two centuries ago. But recognition of their rights to self-govern and their traditional use of their former common lands is a step in the right direction, and a move toward social justice for New Mexico’s Hispano communities. As New Mexico faces the realities of climate change, land grants are poised to face the most existential of questions regarding local governance and traditional agriculture, and to re-engage with traditional knowledge and values that sustained our communities for centuries. 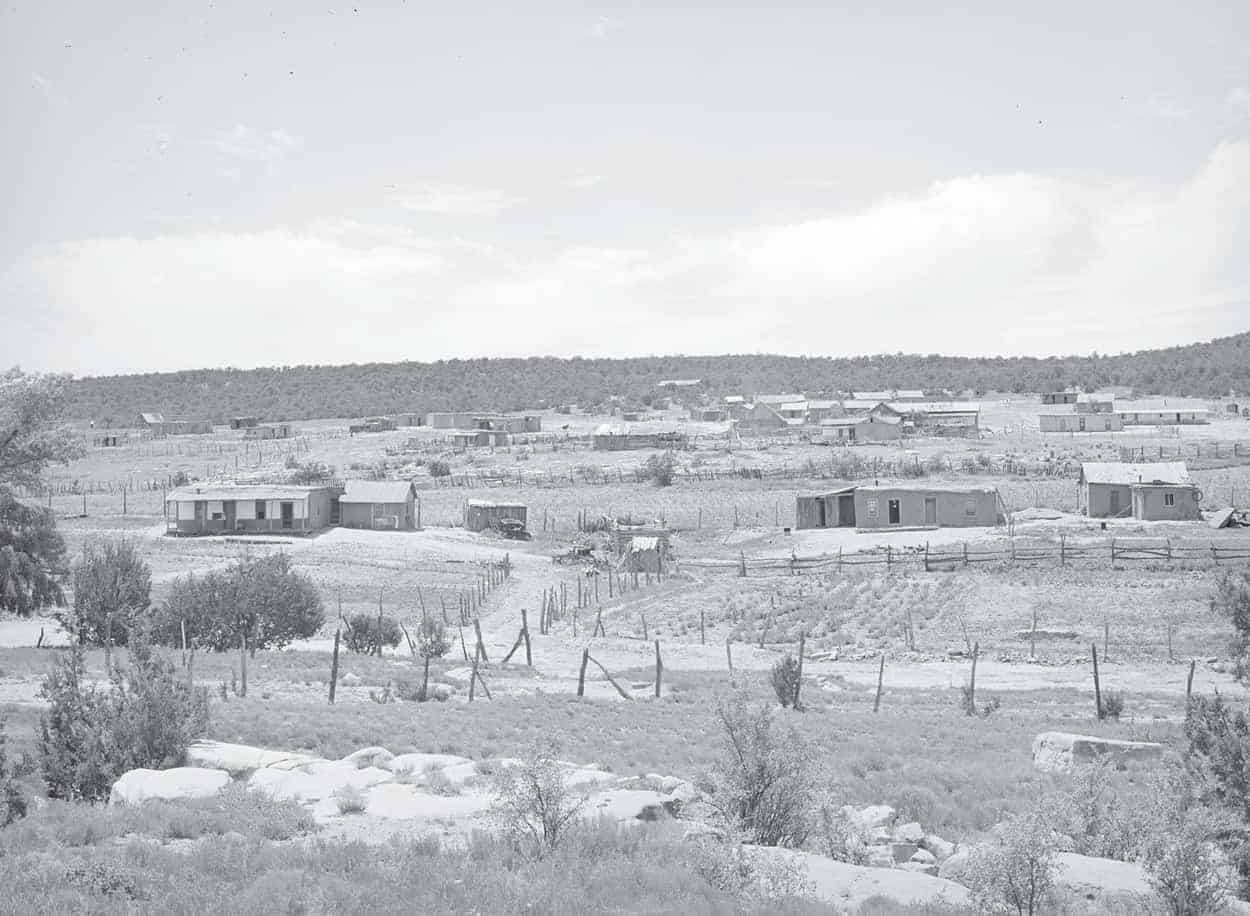 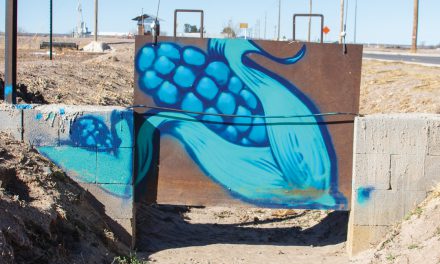 Learning from the Land 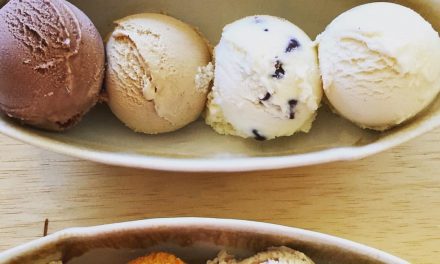 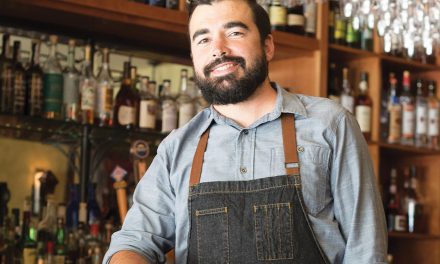