The Muscles of a Mindful Kill 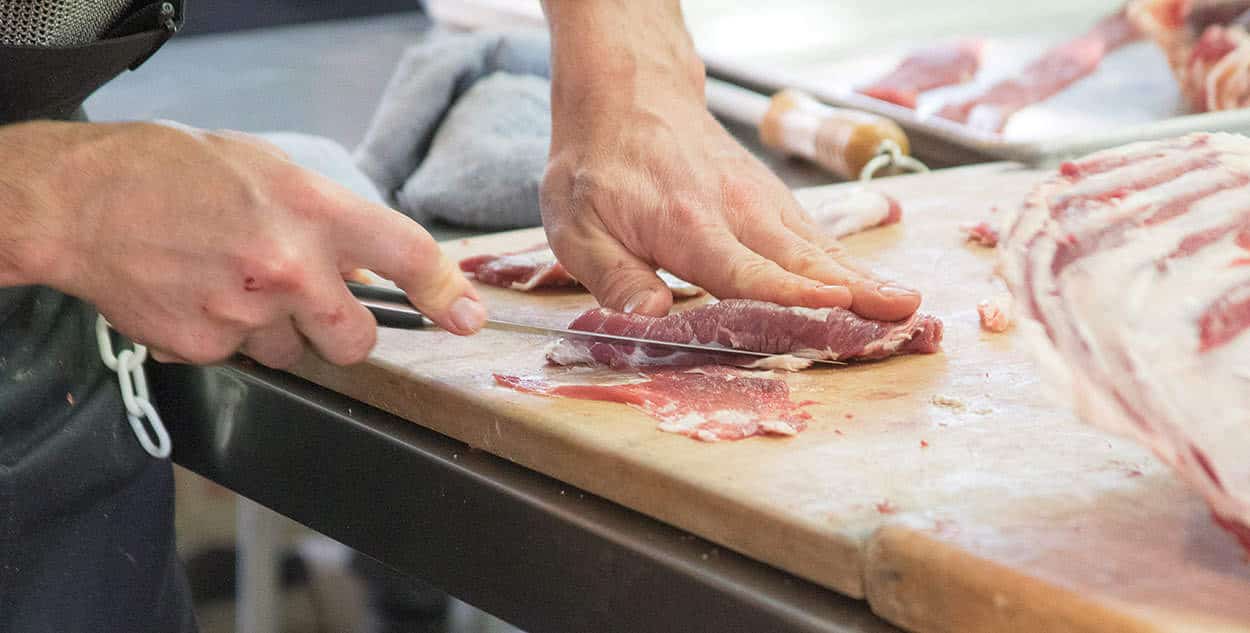 “Usually edible birds don’t congregate around me,” says Adam Danforth as a trio of guinea fowl gather at our feet. We are attempting to sit down for breakfast outdoors, but the hens won’t leave us alone. Clearly, they don’t know who they are pestering. Forty-eight hours prior, Danforth led a group of fifteen farmers, chefs, and home producers through an entire slaughter process—twice—from pasture to freezer. Whole animal butchery workshops like these are the foundation of his practice. “Ever since I started doing on-farm slaughters, I’ve always turned them into educational opportunities,” he says. “I never wanted to do them alone. You always need help, and therefore I always invited people to come.”

Danforth received his initial training at SUNY’s meat-processing program, the only one of its kind in the country. He then worked at prestigious butcher shops and restaurants around New York, including Marlow & Daughters and Blue Hill at Stone Barns. Danforth now describes himself as a “butcher and educator.” He is the author of the James Beard Award–winning Butchering Poultry, Rabbit, Lamb, Goat, Pork: The Comprehensive Guide to Humane Slaughtering and Butchering and a second book devoted to beef butchery, and he travels around the country hosting workshops and lecturing on these subjects. He visited Albuquerque in mid-November and wasted no time during his short stay. One evening, sharply dressed, he sat discussing regenerative grazing practices at a formal roundtable. The previous afternoon, he’d deftly denuded individual muscles from an aged mutton carcass. Earlier that same day, he’d taken a freshly extracted sheep’s esophagus in his own mouth to demonstrate how lungs inflate, then passed around the bright pink organ for us to touch; it felt like memory foam.

In preparation for the kill, the first thing Danforth tells us is that he does not expect to do all the work. “My main priority around on-farm slaughters,” he says, “is not only to think through an animal-centered process, but to also think about how we move through it so that people can feel vulnerable enough to have the experience that I think can be revelatory.” Participation is essential, as is the choice of animal. Danforth ultimately settled on sheep and goats. “They are the best for handling during a slaughter workshop,” he says, because “they are the cleanest kill that can introduce people to the process and get them to participate. And it also can be fast-ish. From a slaughter perspective—there’s little vocalization, there’s not a lot of drama. Those are all things to consider around, again, how do we keep people feeling vulnerable.” What Danforth means is that if we are vulnerable, we are open and engaged. Certainly, it is not pleasant or easy to take the life of a living being. The instinct, based on fear or disgust, is often to turn away. Instead, Danforth encourages us to acknowledge what a rare privilege it is to witness a transition from life to death. Furthermore, when you can make that transition happen in a way that feels peaceful and respectful, the moment of inspiration swells. This is true whether you are taking part in a kill for the first time, or for the hundredth. 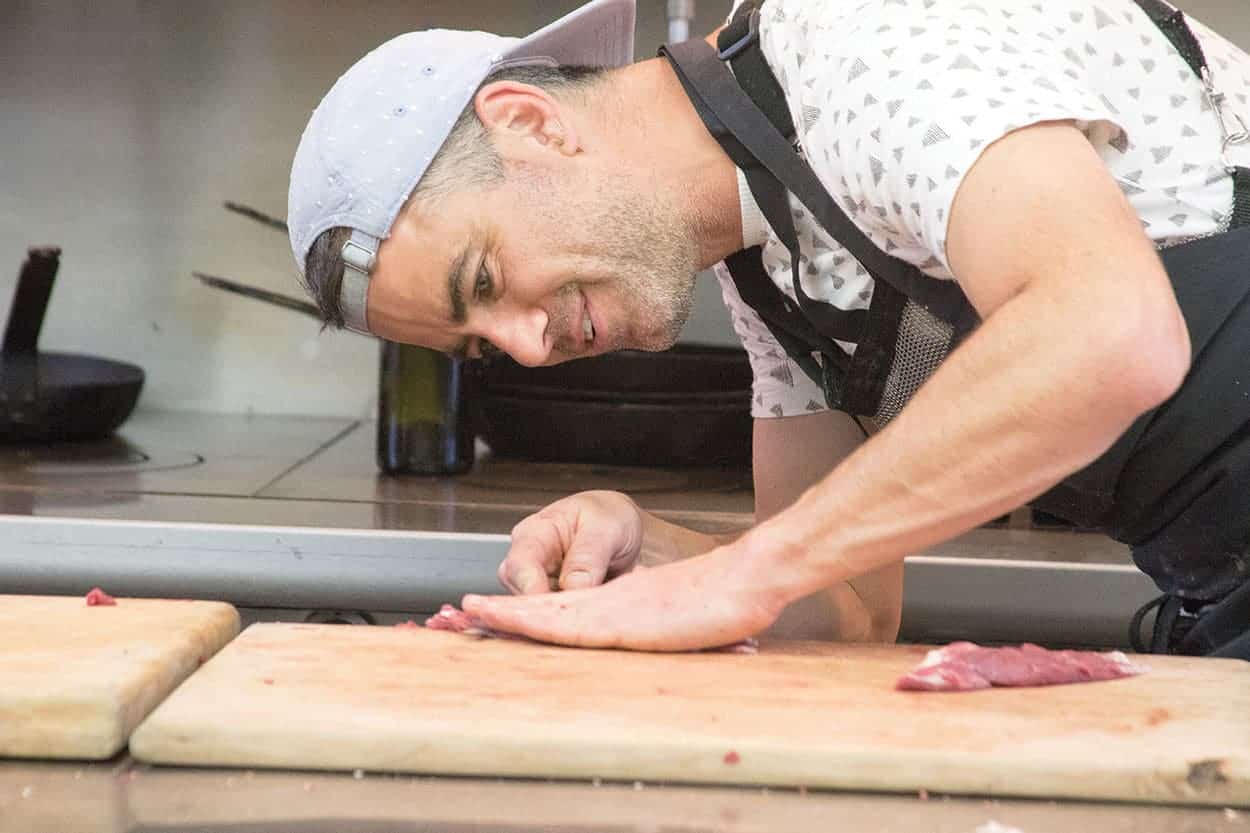 Before we even approach the pasture, Danforth explains exactly what will happen, how it will happen, and who will do what. The entire process centers around reducing the stress of the animal. Not only does this help ensure a humane kill, it also promises higher quality meat. Stress tightens muscles, clots blood, and leads to a degraded product. If participants understand their role in advance, there is little chance of surprise. Less surprise, less stress. Two onsite farmers lead the animal out of the barn, Danforth operates the stun gun, and another participant (a chef, in our case) makes the cut. The rest of us stand out of view to avoid startling the animal. There is no talking during the process and almost no noise from either animal. The entire process is brief, orderly, and thoughtful. Danforth later asks the group how the kill experience compared to other slaughters any of us had been a part of. Everyone has the same response. Much calmer, much quieter, more methodical.

The kill bonds the group, it seems, and awakens the state of vulnerability Danforth considers essential. It’s nearly impossible to keep your guard up when you’re pushing your bare fists between an animal’s hide and still-warm muscle membrane. As the pelt falls away, a pattern of pale-colored strips of meat is revealed across the surface of the animal’s chest. “Finger meat,” Danforth says. It’s what lies between the ribs-often discarded after cutting the ribs away. It’s hard to believe such an attractive, delicate meat is usually trashed. Danforth values individual muscles over traditional cuts, an approach that celebrates these often overlooked parts.

It becomes clear that Danforth is as excited about cooking meat as he is about butchering it. He holds up a sheep’s spleen to show off its unique purplish color and describes cooking it quickly with lemon, lots of parsley, chile, and butter. Spread on thick toast, spleen for breakfast suddenly sounds irresistible. Rattling off recipes as he makes his way through the slaughter (crispy caul fat, soft eggs and brain, braised tongue, shank with capers and anchovy, cheeks) arouses our senses and reminds us that the reward of this work is not just more humane, but also more delicious. It’s an important message, especially for chefs, who make up the majority of our group and many of Danforth’s workshop crowds. “The challenge for chefs is they need to be able to adapt to cook whole animals, and that means not having formulaic approaches to meat. Understanding nuances, whether that’s seasonality or just the fact that you’re dealing with animals where each one is different. When you’re dealing with pasture-finished animals and smaller farms that don’t have programs that rely on the consistency of commercial operations, you learn to celebrate those differences. You develop an approach that recognizes individual muscles for their value, and butcher in a way that relies on sensory perception instead of just chops, stew, ground, roast.” When Danforth is breaking down an animal, he doesn’t start with a map of cuts, but with muscles (and their chemistry—“fat, fiber, and fascia, the three Fs”) and a taste of raw meat. Usually, this taste comes from the top round, which he says gives him a good sense of the condition and flavor of the whole animal.

Chefs influence the way we eat. The evidence is everywhere. You can find kale salad at McDonald’s because enough chefs served enough baby kale that it trickled into the mainstream. We can’t solely rely on chefs, though, to guide our food choices. “Consumers have a responsibility, too,” says Danforth. “They’re part of the system. They’re not just the benefactors of everything that led up to meat getting to their house. These days, I’m shifting my expectations of consumers. They’re interested in making good decisions about meat and producers, or at least taking on a certain responsibility when an animal is killed.” Many consumers have become increasingly aware of the damaging environmental impacts of industrial meat production and inhumane slaughter (air pollution, water pollution, misuse of land, carbon emissions). Danforth explains that butchers, chefs, and ranchers need to support consumers in making decisions that don’t just assuage their moral concerns about killing animals. “I think there’s a way for us to fit whole animal work into that. People do want high-quality meat and they want to support farmers. But it has to be at a price that works for them and in a format that works with the way they want to cook,” he says. This means not only introducing them to pork shank and goat shoulder, but providing high-quality breakfast sausage and cold cuts as well. 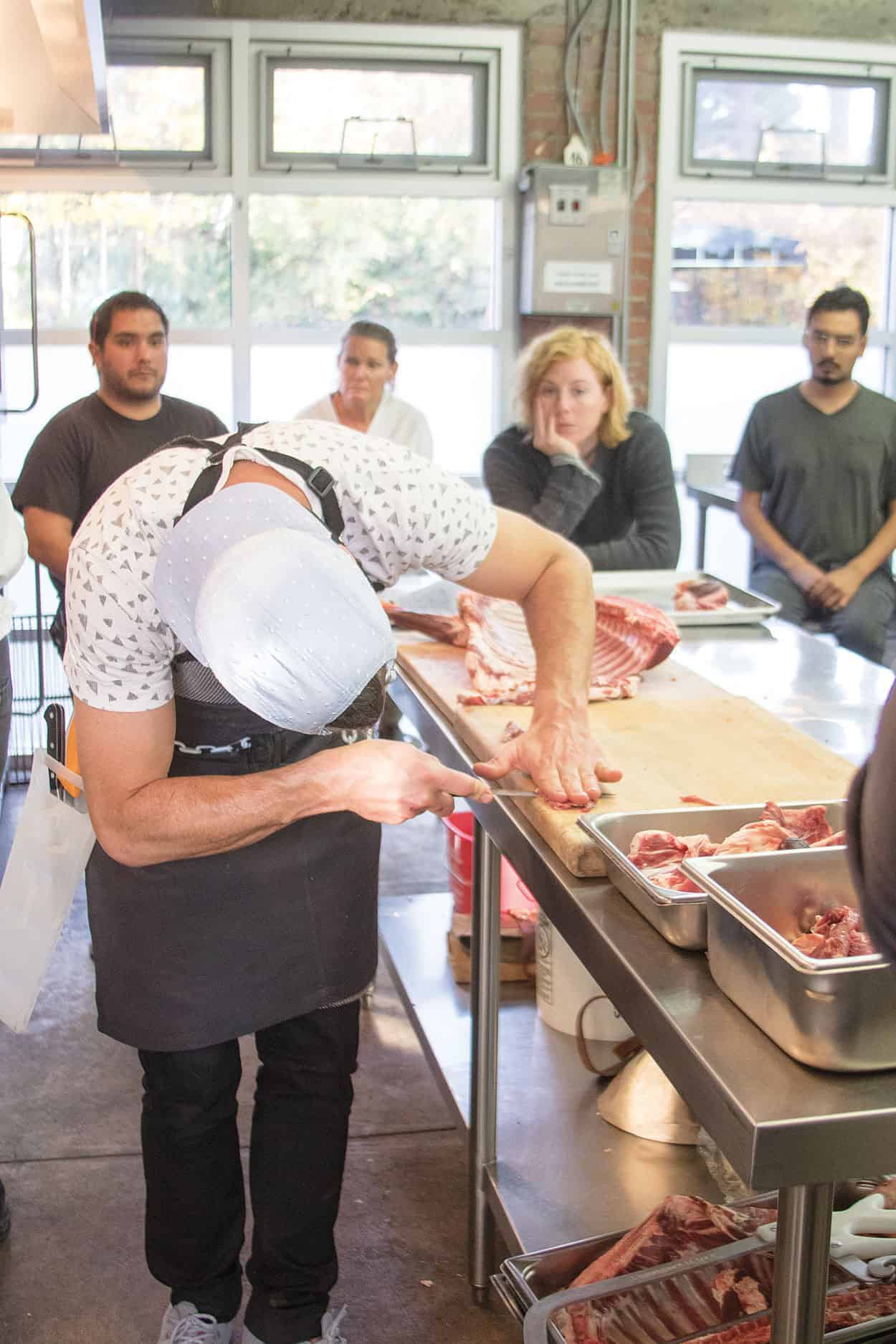 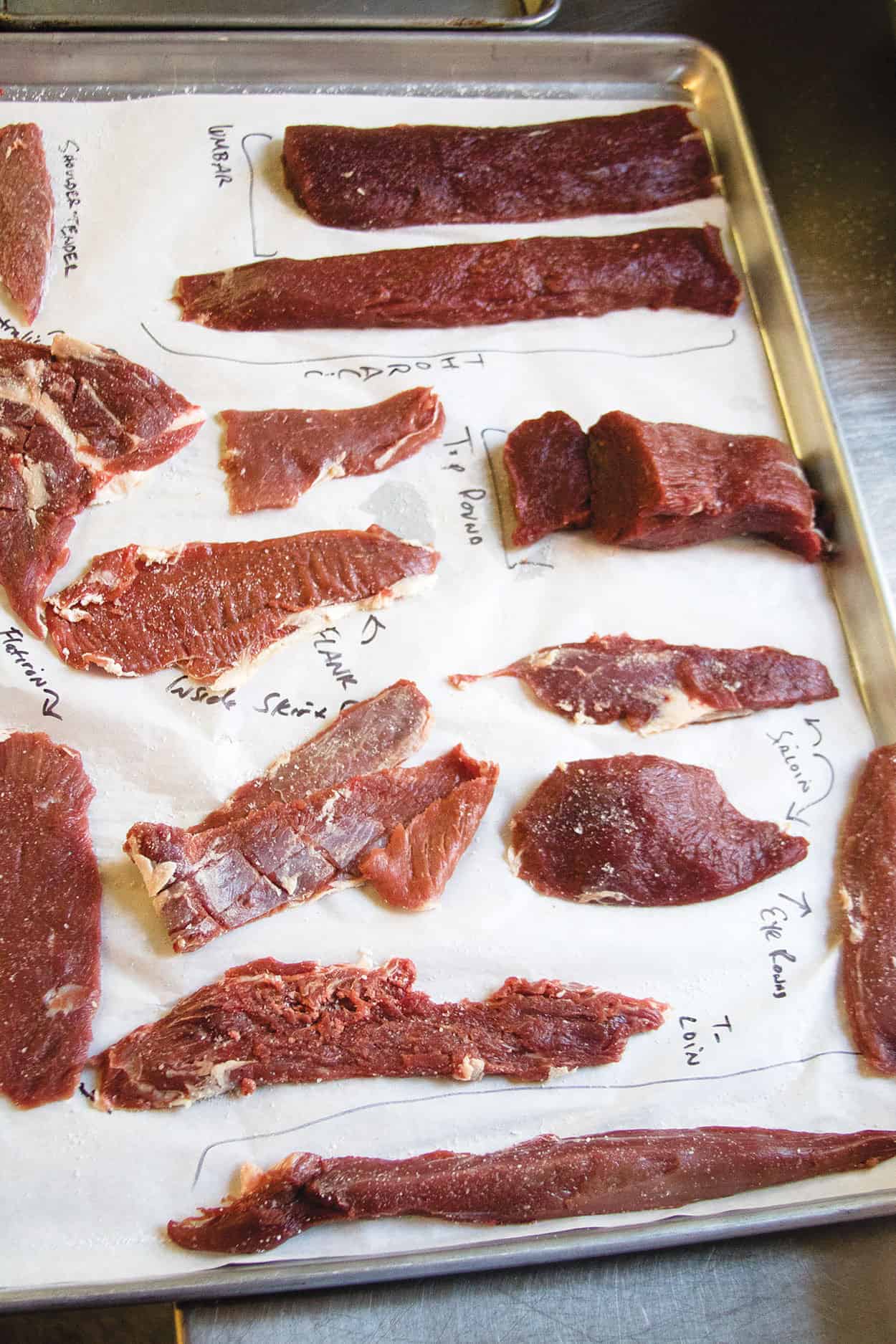 Left: Students look on as Danforth breaks down the aged mutton. Right: Blind tasting of sixteen different cuts from the butchered mutton.

Danforth loves blind tastings. You get the sense he would enjoy that format for almost any food, but he believes it can be particularly revelatory with meat. “For a long time,” he explains, “the butchery workshops didn’t have a tasting component. . . . It’s been the most dramatic change to the format—figuring out a way to give people a sensory experience that reinforced the messaging I was trying to make.” As he breaks down aged mutton, he slices off small samples to be flash cooked in cast iron and passed around for tasting. He challenges the group: Does one taste sweeter, gamier, tougher, more tender? The trick is that there is no right answer. Danforth believes in eating meat that is sweet, gamey, tough, or tender. On our third sampling, one taster remarks: “This is the first one that really tastes like lamb.” He is referring to the distinctive, mineral-rich flavor of the meat. “You’re not eating lamb, you’re eating mutton,” says Danforth, reminding us how we undervalue the meat of older animals.

When you begin to think of an animal in terms of individual muscles, the culinary possibilities expand. “I never buy T-bone, strip steak, or tenderloin,” says Danforth, who wants his students to stop thinking in terms of pre-defined cuts. Instead, he favors flat muscles, working muscles, shoulder muscles. “There’s so much value to so many of these muscles as long as you understand how to bring it out. If you’re a chef with talent and creativity, there’s no better way to approach meat,” he says. “Figuring out how to deal with beef shanks in July, when most people think they are only for winter dishes, is part of that challenge. While you can always grind them into burgers, the reality is, maybe you’re able to create a beautiful pasta dish that utilizes and extends the shank meat.” He explains that, through necessity, butchers and chefs “are forced to expand our ability and reconsider the entire process. Everything is our responsibility: low waste, honor the ingredients, support the farmer.” 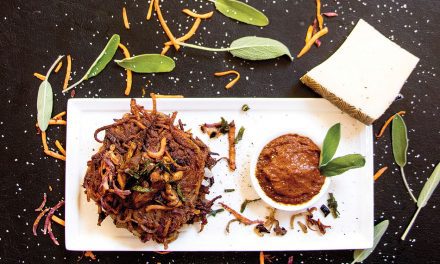 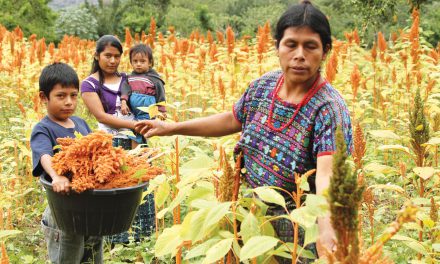 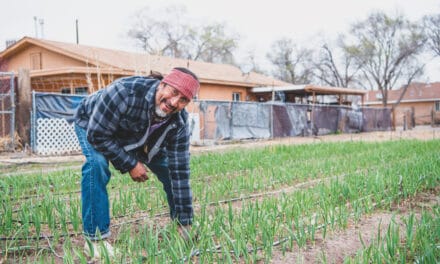