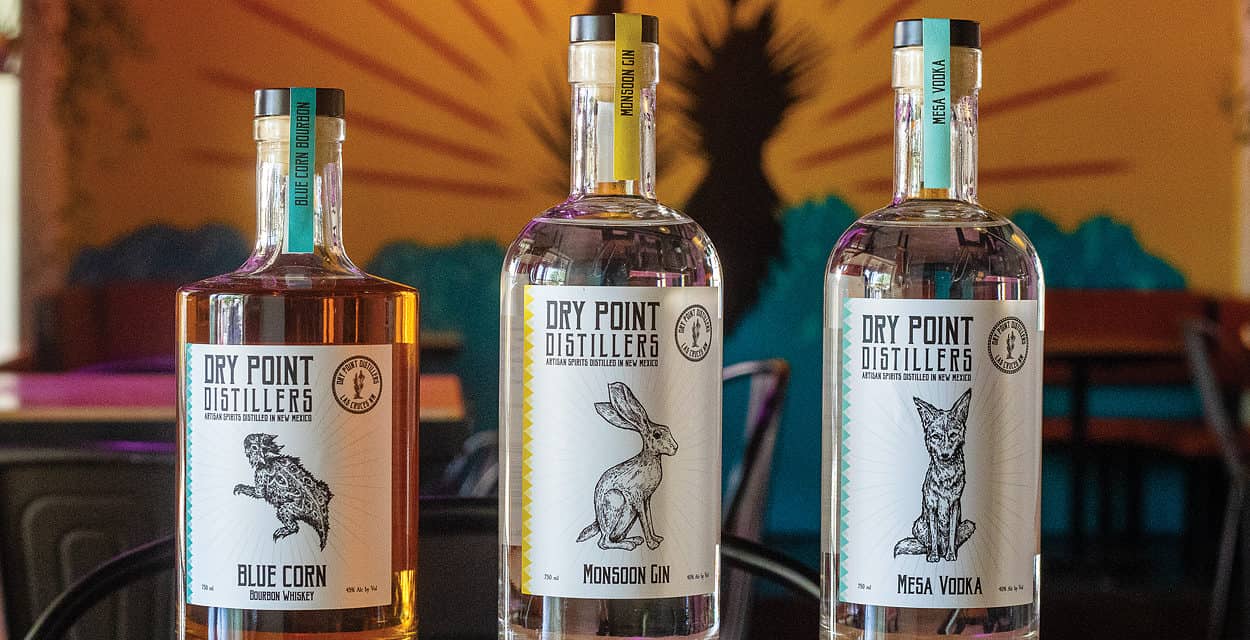 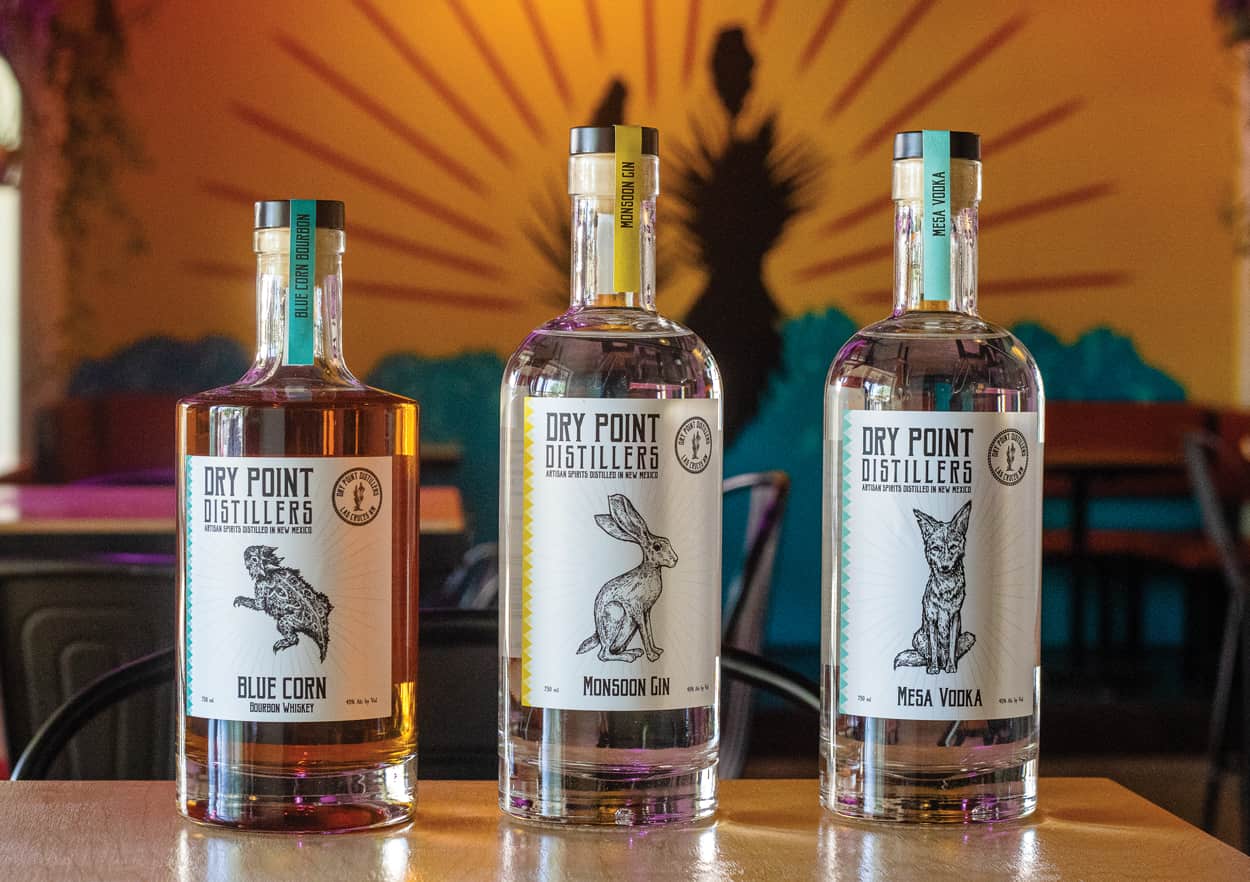 “I claim it,” Chris Schaefer says when I ask if he’s from Las Cruces. Schaefer, the head distiller at Dry Point Distillers (“I’m the everything—the janitor, the repairman, but also, yeah, head distiller”), was born in Dallas and lived in both Colorado and Albuquerque in his early childhood, but his formative years unfolded in southern New Mexico’s largest city. “I’m kind of a Cruces-or-die person,” he adds, rattling off all the reasons he loves it, from its small-town quality to the surrounding public lands to the proximity of the US-Mexico border.

Schaefer opened Dry Point, Las Cruces’s only distillery, with his father, a since-retired family practice doctor, in 2018. They essentially started distilling in the garage, using a fuel ethanol permit, which, he explains, is one of the only ways to distill legally at home—“but everything you make must go into farm equipment.”

That’s not to say he grew up farming, exactly, although his mother always had a huge garden and the family owned a couple acres of alfalfa—both of which likely contributed to a certain ethos of place.

Why Dry Point? “Everyone thinks of New Mexico, and especially southern New Mexico, as being barren, but then we have this amazing valley,” he says, referring to the Mesilla Valley. Also, “the Organ peaks are pointy,” Schaefer notes, “and they’re definitely dry.” When I walked down to the banks of the southern Rio Grande in early fall, I found a riverbed so dry that the tire tracks running through it were undisturbed. It turns out that Dry River was an early contender for the business name, but an LA brewery had already taken it.

“At first,” he says, “we got really into making different brandies,” using foraged ingredients from prickly pears to mesquite pods to feral pomegranates. Contrary to common perceptions, “the Chihuahuan Desert is brimming with flora and fauna.”

But he got into the business because he wanted to make good whiskey. 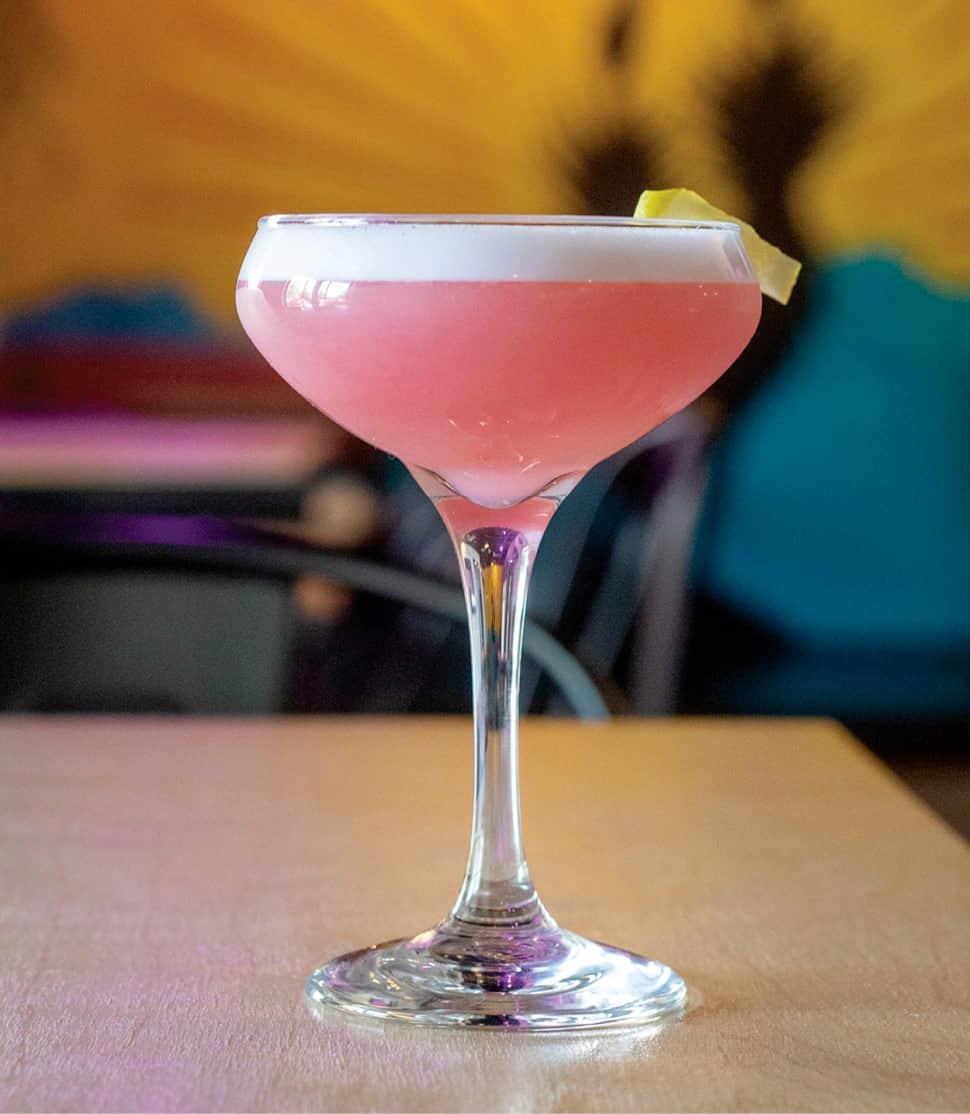 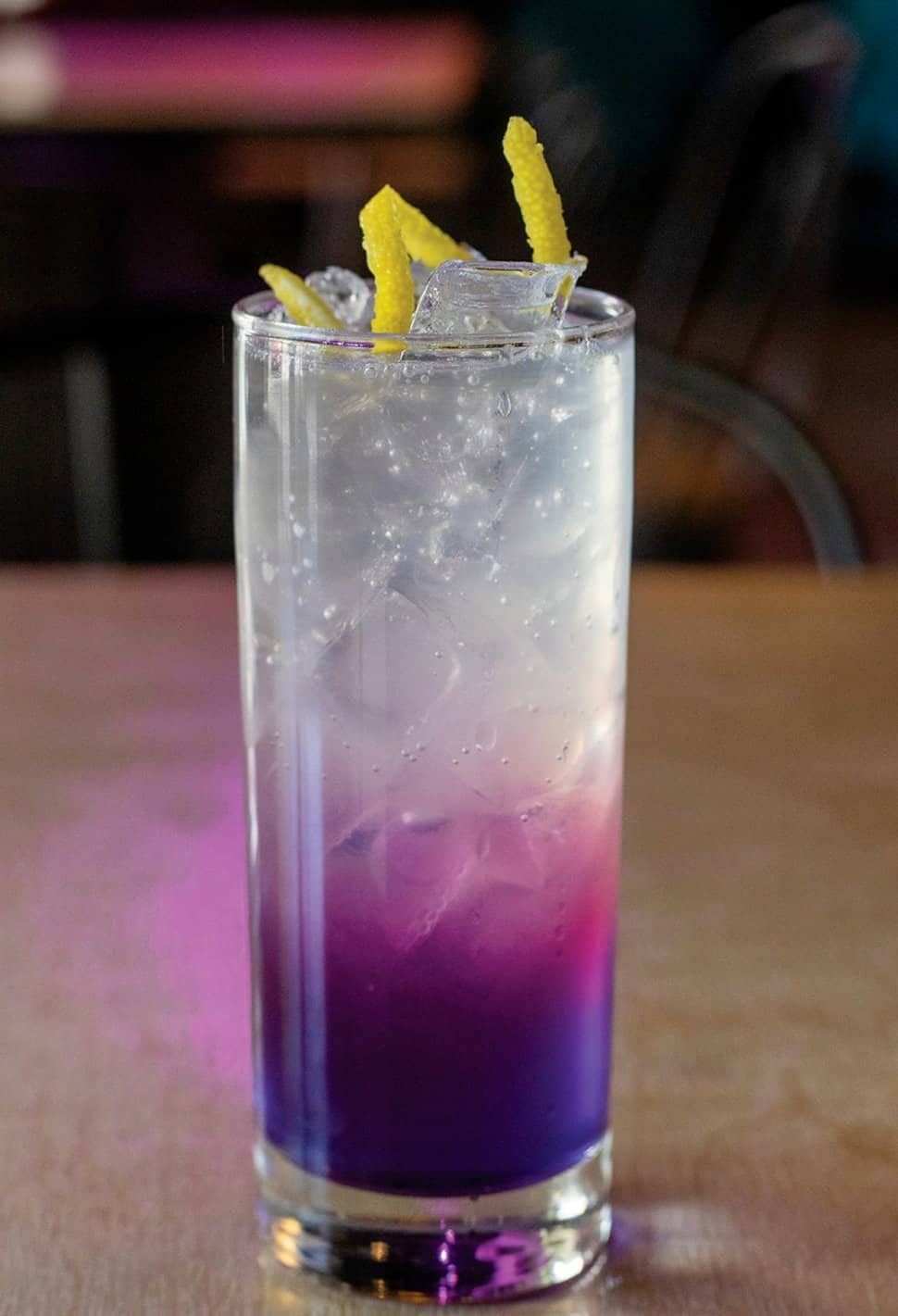 “My Blue Corn Bourbon is something that I ferment from scratch,” Schaefer says, explaining that he gets New Mexico blue corn (along with a bit of yellow, mainly to boost starch content) from Southwest Heritage Mill in Albuquerque, which “does atoles and chicos and a bunch of stuff but sources to distilleries all over the state.”

The Blue Corn Bourbon is aged for fourteen months in smaller-than-conventional barrels, which speeds up the process. It’s produced in small batches, so it can be elusive outside Las Cruces—try Jubilation Wine & Spirits in Albuquerque, or ask your favorite bar or liquor store to order it. A bit more widely available is Dry Spell Bourbon, a whiskey sourced from MGP, a large whiskey producer from whom brands such as Bulleit, WhistlePig, and Templeton Distillery have sourced at one time or another. “Dry Spell was from when we first opened and the blue corn bourbon was still aging,” Schaefer says, and his original intent was to discontinue it once he had his own bourbon on the shelf. “But it’s a good whiskey,” and customers love it, so it’s transitioned into being their well whiskey.

“I’m not a microdistiller,” Schaefer asserts at one point, “I’m a nanodistiller.” Later, as he’s telling me about the mezcal he’s sourcing from Durango, Mexico—“an amazing mezcal,” with a different flavor profile from Oaxacan mezcals—which he’s serving at his taproom and bottling as Slow Desert Agave Spirits, he compares his role to that of a film producer. Part of what he does is creating, and part of what he does is finding things worth sharing.

Like the majority of small-scale distillers, Schaefer buys a base spirit to make his vodka. “I run that through a still again, really scrub it, then run it through a charcoal filter to clean it up as best as I can,” he explains. “The filtration is where I can do the most good for the drinkability.”

Gin is arguably more interesting, and it’s “fun for a distiller,” Schaefer tells me, “because as long as it’s 51 percent juniper, you can add whatever you want.” His Monsoon Gin is crisp, bright, and faintly sweet, with high notes of licorice, and one reason it might stand on its own is that Schaefer did all his tastings neat as he developed the recipe. It took around thirty batches before he got it right, and he laughs as he recounts being asked whether he’d tried mixing it with anything (he hadn’t). “Thankfully, it mixes well with citrus and tonic and soda waters, as gin should, but it was absolutely developed to be sipped straight.”

To make the gin, he uses vapor infusion, which he finds to have a cleaner flavor than maceration. “Some people do separate batches with each herb,” he says, “but I do the whole flavor bill.” He’s observed that the flavor of different aromatics develops at different points: “Citrus must have a lower boiling point because you taste it early in the distillation process, whereas rosemary is tasted later.” Rosemary, along with coriander seed, can be sourced locally, but ingredients like licorice (Glycyrrhiza glabra) don’t grow here and have to be imported.

“We do a lot of infusions at the bar,” Schaefer says, “and that’s where we’re most using local ingredients.” He partners with FARMesilla to buy fresh-pressed apple cider, melons, and herbs, and also buys edible flowers and herbs from Calhoun Flower farms. On occasion, they’ve also used red chile, piñon, and pecan to infuse their spirits. 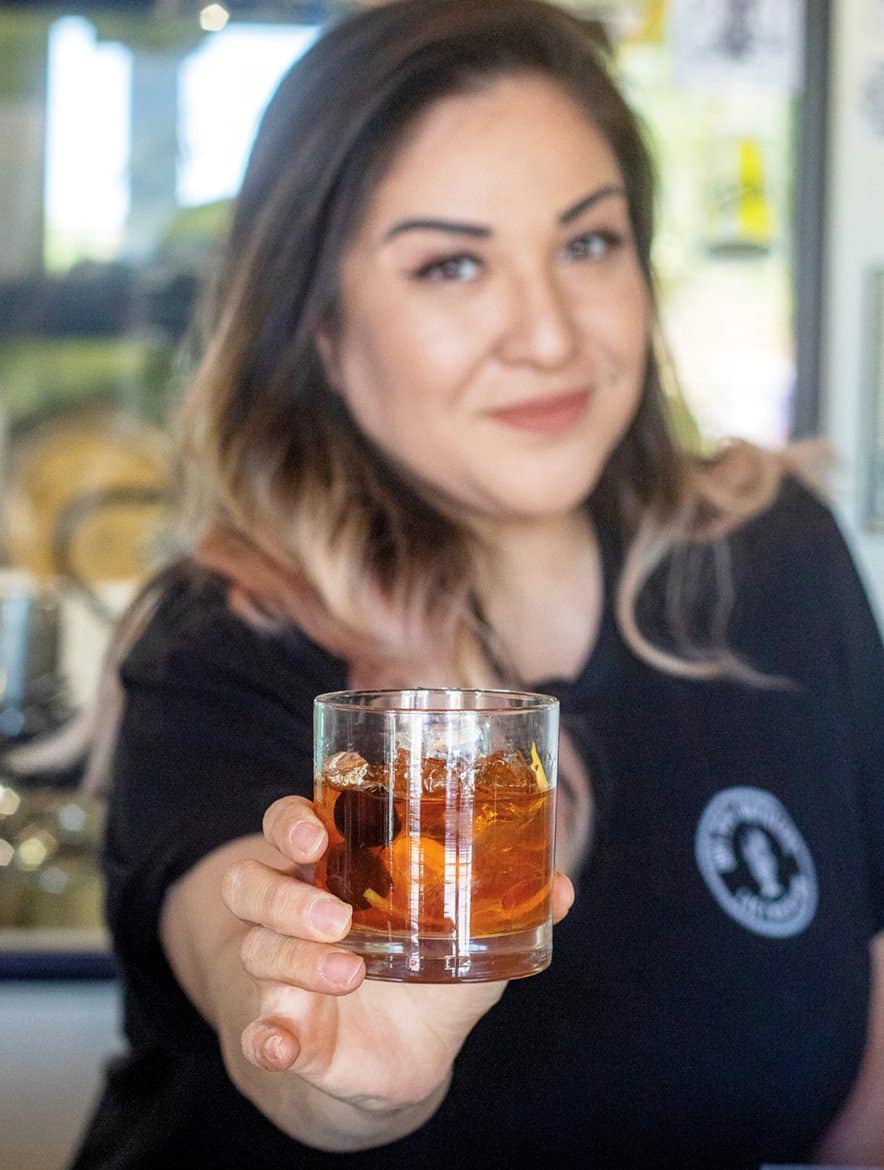 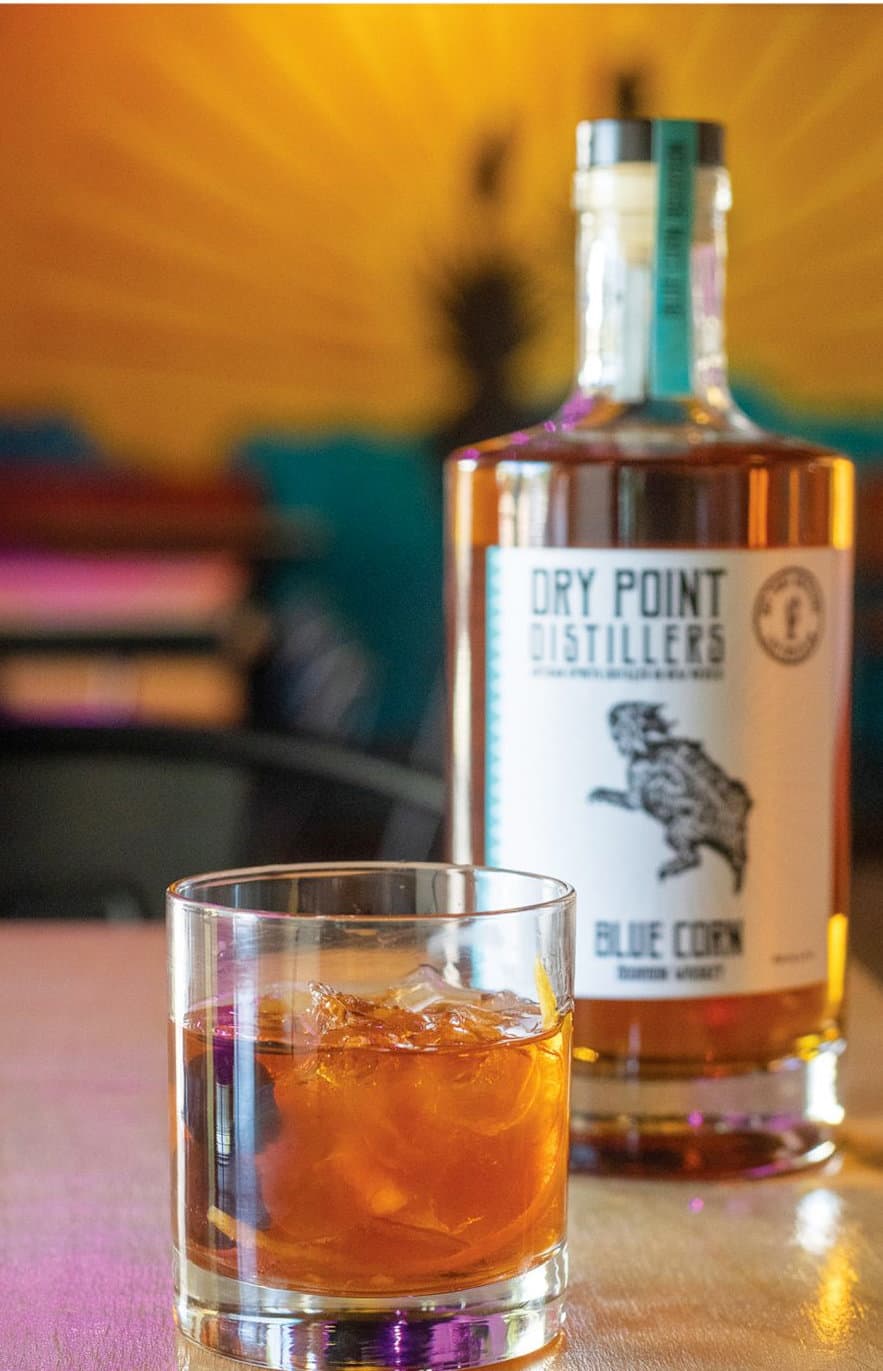 “The creativity [in the bar] really comes from Tammy,” he says, referring to his longtime bar manager, Tammy Mendes. “She’s the brain behind the mixology.”

Schaefer describes himself as a hands-off boss, one who’s happy to have someone else developing seasonal cocktails and training new staff. No doubt it helps that Mendes comes up with excellent house cocktails to serve alongside a solid roster of classics.

Prior to pivoting into entrepreneurship, Schaefer worked as a firefighter. It was a job he was drawn to because he likes to be outside and wanted to get off the beaten track, and the seasonal work schedule suited his rock-climbing lifestyle. It was less conducive to sustaining a relationship with his current partner, who’s also the graphic designer at Dry Point.

“As a firefighter, I didn’t like leading a crew, didn’t want to be responsible for someone else’s day,” he says, so now, he gives his team a lot of say—to the point of letting them weigh in on what time the taproom should close. He also pays a “tipped” and an “untipped” wage, boosting his employees’ pay on slow nights.

Schaefer views the size of his business as an asset, not only because he can more easily accommodate paying sick leave for ten employees than for sixty, but because he was able “to not completely freak out” in response to pandemic closures. Small also means his taproom, which feels busy with thirty or forty people inside (there’s additional seating on a patio), is appealing to those (this writer being one) who are drawn to intimate venues.

Next time I’m down, I’ll take a closer look at the old fire maps that adorn the walls in the taproom’s WC. Maybe I’ll follow Schaefer’s advice and try their paloma. As for where to hike, fire conditions permitting: “The Organ Mountains are unconquered mountains. The Sandias are gorgeous, but you can drive to the top.” 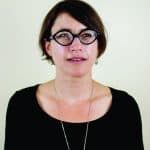 Briana Olson is a writer and the co-editor of edible New Mexico and The Bite. She was the lead editor for the 2019 and 2021 editions of The New Farmer’s Almanac. 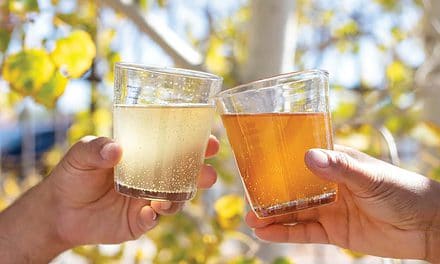 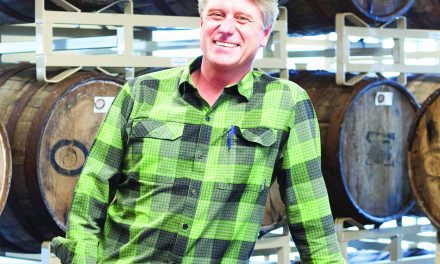 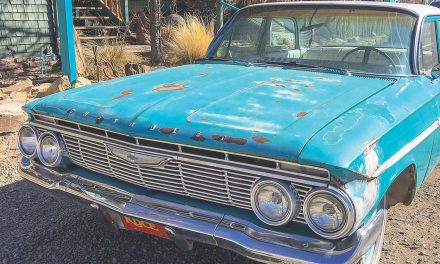