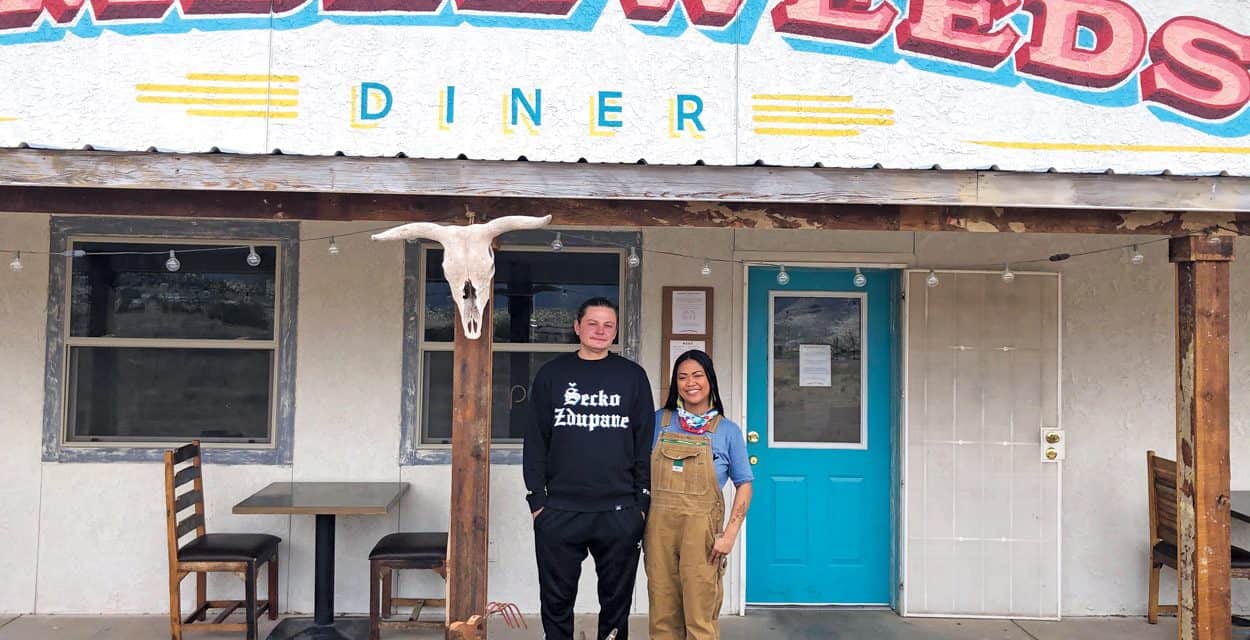 Tumbleweeds Caters to Community and Beyond

Words and Photos by Candolin Cook 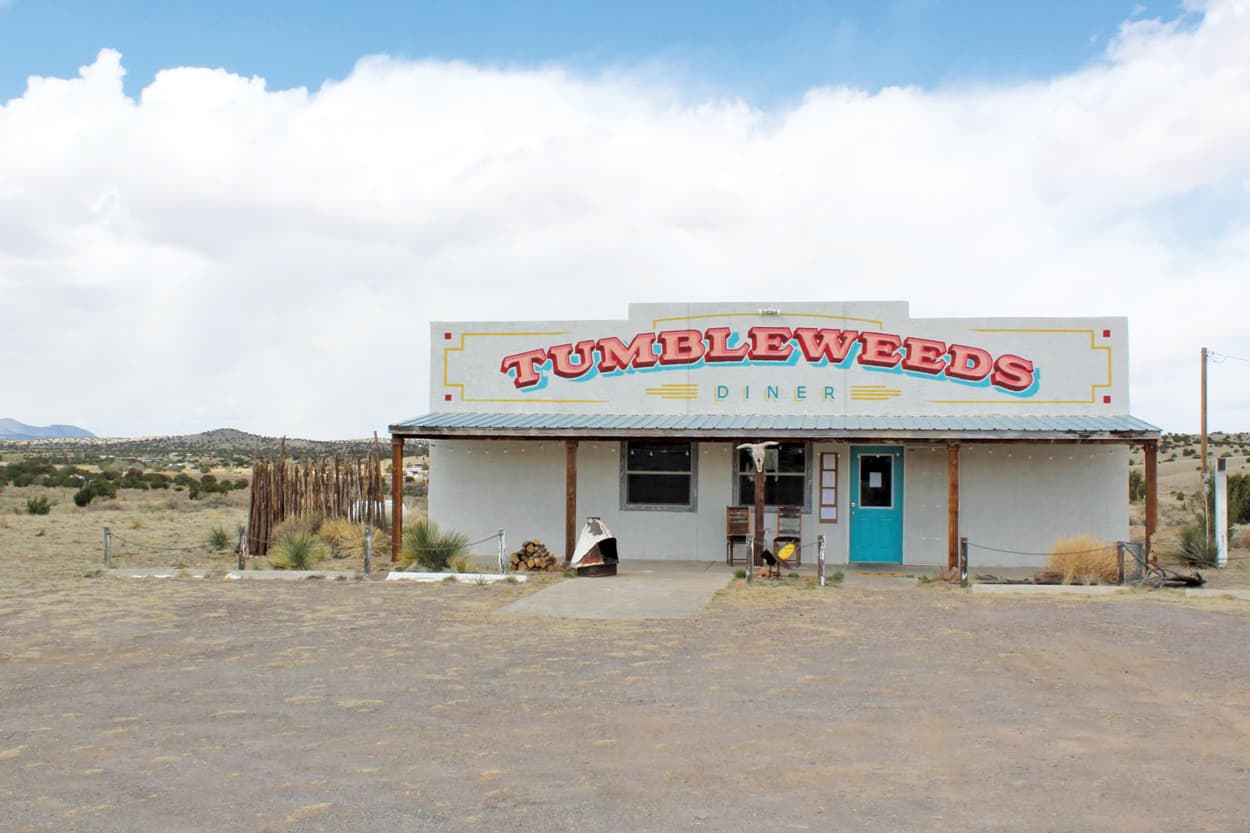 On a sleepy Tuesday afternoon in Magdalena, Eddie Tsosie—a Navajo artist and bit of a local legend—pulls off of historic Route 60 and into Tumbleweeds Diner’s dusty parking lot. Having just opened in March 2021, the restaurant’s freshly painted white-and-turquoise exterior gleams against the muted high-desert landscape and unobstructed blue skies. A cow’s skull has been fastened to a front post and an eponymous tumbleweed lies dormant near the entrance. It is a classic roadside diner, straight out of central casting.

As Tsosie begins to pull a series of colorful, Native- and western-themed paintings from the trunk of his car, he is met by Tumbleweeds co-owner Osiris Navarro. She purchases a handful of Tsosie’s works on this visit, to go with several others already on display in the dining room. The diner’s walls are, in fact, covered with fine arts and crafts made by local artists, along with taxidermy and antiques gifted from community members or left over from the restaurant’s last incarnation as the Big Bear Cafe a dozen years ago.

Just as inviting as the decor are the aromas of green chile cheeseburgers, fried chicken, and mac-and-cheese filtering in from the kitchen. From grinding their own locally sourced beef to pickling their own veggies to creating their own dressings and sauces, most everything at Tumbleweeds is made from scratch, using quality, fresh ingredients. The rotisserie chicken is slow cooked to perfection, and the velvety sauce smothering the loaded chile cheese fries is worth a ninety-minute drive from Albuquerque. It’s diner comfort food executed at a level that truly makes it anything but greasy-spoon fare.

While the aesthetic and food at Tumbleweeds embodies southwestern Americana, the couple behind it are a bit more cosmopolitan. Navarro’s husband and business partner, Michal Gola, is a self-taught chef, born and raised in the Czech Republic. He moved to Queens, New York, when he was seventeen, before relocating to Seattle and forging a career in the restaurant industry for the last twenty years. Navarro is originally from the Philippines, though she moved to the Emerald City as a young child, and has a background in marketing and graphic design. A few years ago, the two started a catering company in Seattle, Gola’s Kitchen, featuring global cuisines—Mediterranean, Latin, Asian—and recipes showcasing the abundance of the Pacific Northwest.

In January 2020, the couple decided to take a trip to visit a good friend who lives in Magdalena, ahead of their busy year full of catering weddings and other events got underway. When they arrived, they immediately fell in love with the village’s small-town charm, distinct multicultural history, and pleasant climate. They’d long discussed leaving Seattle, perhaps returning to their European and South Asian roots, but something about the slow-paced desert town began to spark conversations about how a life in the Southwest might look.

Two months later, the pandemic and shutdown wiped their year’s catering calendar clean. Faced with the prospect of having no foreseeable income while living in one of the country’s most expensive cities, Gola and Navarro decided that Magdalena—and that cute, vacant roadside diner they had seen on the west edge of town—was their future. That July, they inadvertently became part of a national trend that saw residents of largely coastal metropolises flee to smaller cities and towns to escape cramped quarantine quarters, high rents, and dense populations.

While analysts have warned that talk of a national “urban exodus” is both overblown and short term, there are perennial concerns in New Mexico about the correlation between urban transplants and housing scarcity, gentrification, and cultural appropriation. As newcomers, Navarro and Gola are very aware of those concerns and say they have consciously tried to assimilate to their local community and cater to its needs and wants, rather than attempting to transform or co-opt it. Magdalena’s population skews older, and many residents’ families have been in the area for generations. Historically, Magdalena was a cattle town known for its stockyards and train depot. Today, the surrounding area is still greatly populated by ranchers, farmers, and residents of the Alamo Navajo Indian Reservation, which lies less than thirty miles to the north. Villagers have a deep connection to the land and to their collective histories. There is even an Old Timers Reunion every summer (global plague permitting), in which the village celebrates its “Old West” roots with rodeos, western swing dances, and chuckwagon cookouts. 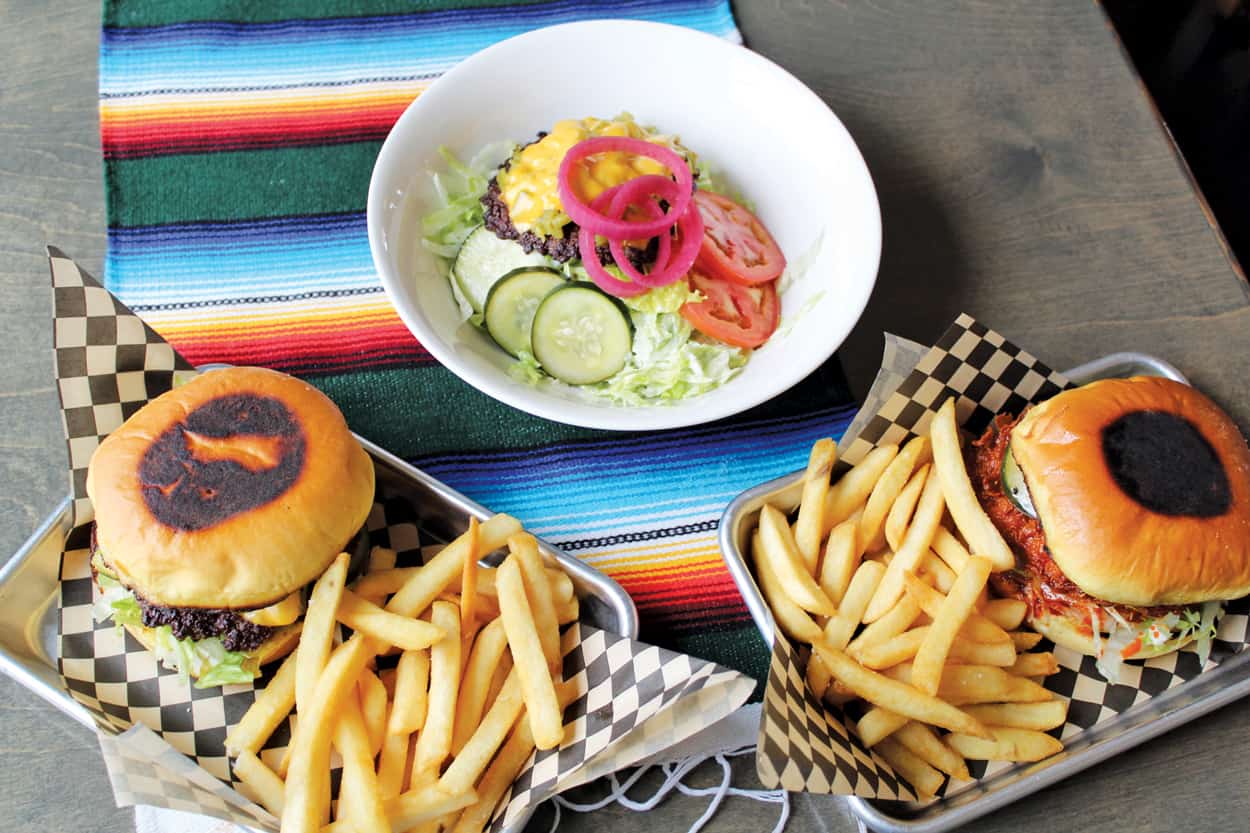 “We always knew we weren’t going to come in here and start serving quinoa,” says Navarro. But some of Gola’s original ideas for the menu (e.g., prime steaks, porchetta) and their necessary price points didn’t quite resonate with diner patrons either. So Navarro and Gola spent the majority of the last year fork deep in research and recipe development. They sampled, read up on, and spoke to elders about local foods; experimented in the kitchen; and, most importantly, listened to feedback from their new community. “Chile needs to be hotter,” was one unsurprising early critique. Eventually, Gola was able to marry local tastes and traditions with his own unique culinary talents and point of view. “That’s not posole,” said one customer after tasting Gola’s rendition, “but it’s the best posole I’ve ever had.”

While the everyday menu is full of spins on familiar favorites, Gola is also able to spread his wings with daily specials (for instance, a rice bowl with five-spice local pork belly, pickled veggies, edamame, and bok choy), and he and Navarro will be introducing special pop-up dinner events. Plans include a Hawaiian night, Malaysian cuisine, and dishes from Gola’s native Czech Republic. “We are excited to maybe introduce some new things to people or [provide] things they just can’t get around here, like Asian food.”

Since opening, Navarro and Gola’s intentionality and collaboration has paid off. Even within the confines of COVID-19 capacity limits and social distancing, Tumbleweeds has become a local gathering place and an avenue for connection in isolating times. “People stop by just to see who is eating so they can visit and pick up each other’s tabs,” says Navarro. “They let your kind in here?” is a favorite local joke.

“The community came together for us,” Navarro says, noting the hundreds of volunteer hours that some locals put in to help them build out the restaurant. To give back, the couple is trying to use their resources to help give a boost to the local economy. Thanks to Navarro’s marketing background, Tumbleweeds has gained a healthy social media following, which has attracted an increasing number of out-of-town patrons. Navarro encourages these tourists to not only eat at the diner, but to visit Magdalena’s numerous galleries and shops. On-site artisan fairs are in the works to help support the town’s vibrant art scene, and Navarro used her Instagram following to help sell Tsosie’s works after his sales took a hit during the pandemic. In addition to working with local ranchers, the restaurant will soon begin sourcing vegetables from young farmers growing produce in the greenhouse at Magdalena’s K–12 school.

One would think there’s a sitcom to be made about a big city couple with international upbringings moving to this tiny, colorful New Mexico town. But Navarro and Gola don’t quite fall into fish-out-of-water stereotypes. Their deep respect for the town—its peoples, cultures, and history—is evident, and they’ve taken quickly to the simple pleasures of village life. “Our favorite thing to do is watch the sunset,” says Navarro. Perhaps that’s not quite as exciting as a night out in Seattle, but it seems to suit this small-town couple just fine. 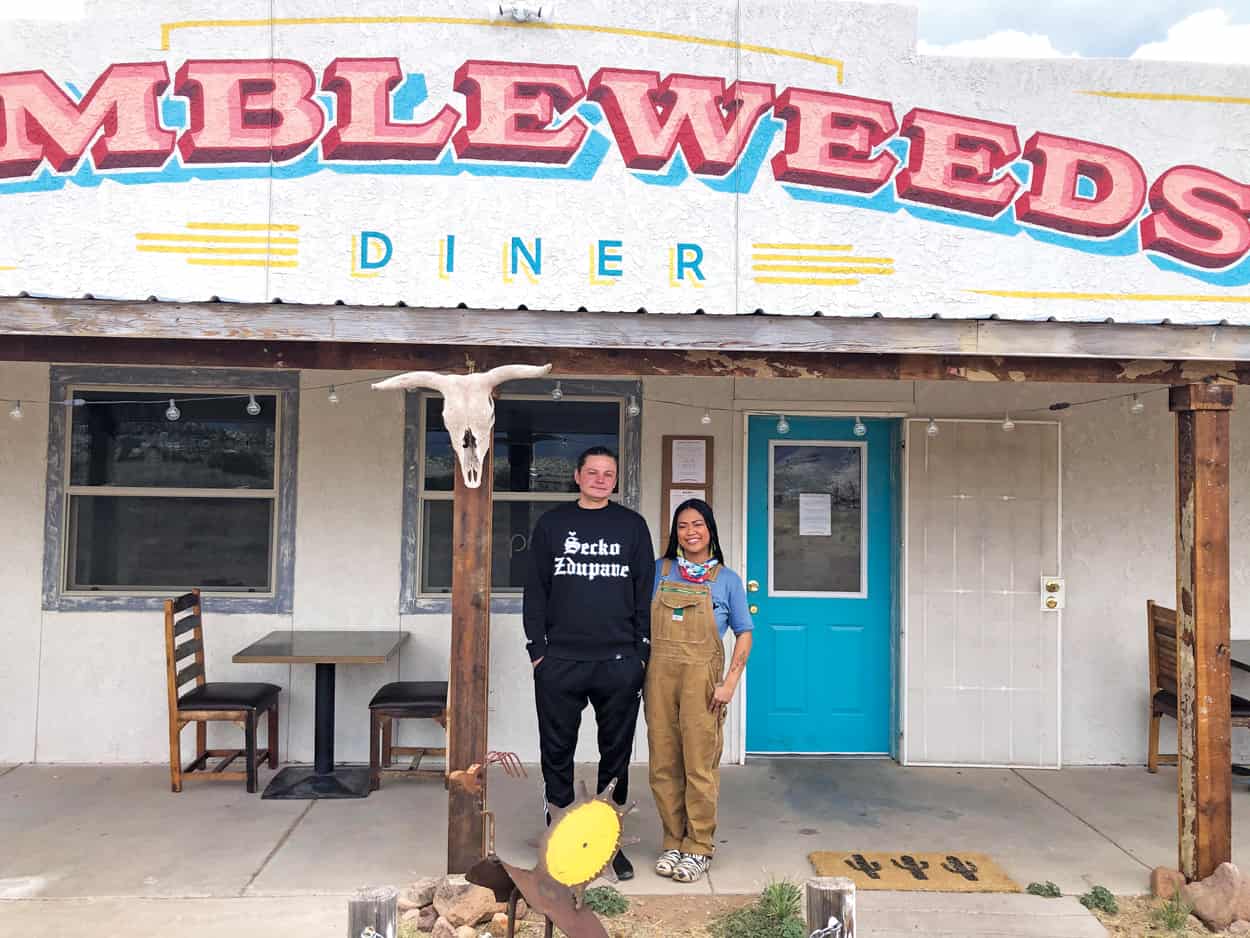 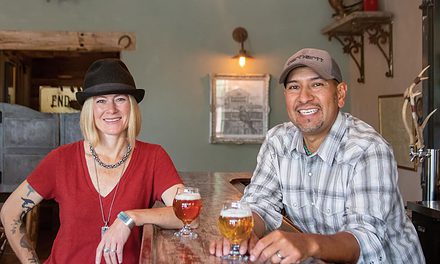 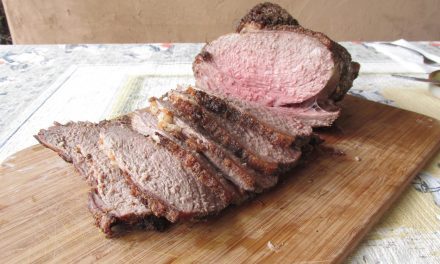