Medical marijuana dispensaries may not be the first place one thinks of when searching out delicious desserts and confections. However, two Santa Fe–based companies are making an effort to change perceptions surrounding cannabis edibles and to elevate the market in the process. Best Daze and Kure Cannabis offer a diverse line of high-end treats made to appeal to a variety of appetites. Single-origin bean-to-bar chocolates, gourmet ice cream, made-to-order cakes, and fresh juices have replaced the musty pot brownies of yore, and the dispensaries’ clients have responded with resounding appreciation. In addition to receiving the medical benefits of tetrahydrocannabinol (THC) in the edibles, clients can now enjoy the treats’ bold flavors and creativity.

Minka Ingersoll, who cofounded Kure Cannabis with business partner Fredrick Lucas, describes her dispensary’s edible offerings as “gourmet meets conscious eating meets alternative medicine.” While most other dispensaries start their operations focused on selling the marijuana flower, producing delicious edibles using healthy methods has been a priority for Kure from the start. Ingersoll was inspired to enter the cannabis business after observing a family member struggle to find sugar-free marijuana edibles to support her through a serious illness. Ingersoll identified the gap in the local market and worked together with Lucas, a nutritionist and chocolate maker, to take on the arduous task of applying to become a medical cannabis producer in 2015. Ingersoll and Lucas’s partnership was among thirteen entities, including Best Daze, selected to become licensed non-profit producers of marijuana in the state of New Mexico that year.

Since Kure Cannabis opened its doors, edibles have been a key component of the business. Ingersoll says, “I really wanted to make a difference in the edibles world with fresh juices, teas, and homemade ice creams that have a gourmet flair. We try to use as much organic as possible, and we source ingredients from local farms, as well.” Lucas obtains premium cacao beans from around the world and makes them into bulk chocolates, which Kure’s bakers use in the confections they create. One of the bakers, Angelica “Jelly” Chavez, honed her dessert-making skills in sweets shops in New York City and at Santa Fe’s own Kakawa. Discussing the inspiration behind the creations she makes for Kure, Chavez says, “I’m always paying attention and looking for interesting flavor combinations everywhere I go. I’ve even been inspired by cocktails.”

For Ingersoll, who grew up eating organic vegetables and herbs from her mother’s garden, clean and healthy ingredients have always been important, but the look of the edibles Kure presents is also essential. She says, “I love aesthetics. I love beautiful food. Not only is the food thoughtful, and the ingredients are thoughtful, but the presentation is priority, as well.” Her commitment to aesthetics extends to the interior design of Kure’s shop, which features chic blonde wood, marble, and stone accents. It is not a surprise to learn that Ingersoll formerly worked in design.

In the near future, Kure will open a second location in Santa Fe on Siler Road. The company is also planning to collaborate with local chefs on special edition edibles, to add savory creations, and to expand their vegan, gluten free, sugar free, and sugar alternative options.

When asked about the biggest challenge of learning to cook with cannabis, Carlos Torres, head chef at Best Daze, says with a laugh, “Not getting high!” Torres began working for the dispensary in last May, after a stint under Dallas-based, James Beard Award–winning chef Stephen Pyles. His gourmet aesthetic has helped elevate Best Daze’s edibles offerings, even if the learning curve was initially steep. In addition to minimizing the tasting of his creations during the cooking process, Torres also faced outside speculation on the limits of cannabis edibles. “There’s a lot of things that people think you can’t do with cannabis. I like to prove them wrong,” says Torres. Inspired by the changing seasons, he creates sweet medicated treats with restaurant-quality precision and gourmet flair. On a chilly October morning, he listed one-off edibles he plans to release during the cooler months, including green chile apple pie, biscochitos, gingerbread, and bûche de Noël.

Prior to Torres’s hiring, Best Daze’s kitchen was headed up by Ryan Lampro, who held managerial positions at Santa Fe institutions, Chocolate Smith and Whoo’s Donuts. Having Torres in-house has allowed Lampro to open up his focus on the manufacturing process as a whole and to strategize on how best to serve clients. With regard to the dispensary’s edibles, Lampro explains, “We have our staple items that are always going to be there and that we try to always keep in stock . . . but we’ve been introducing more one-off items and things with a shorter shelf life, and they seem to be moving. . . . We’re constantly rotating to something else, and it keeps the fire going.”

Eli Goodman, who cofounded Best Daze with his father, Len, a pioneer in the New Mexico cannabis market, says, “One of the interesting things about edibles is dosing. The big complication with eating cannabis is that you have an hour and a half or two of digesting before you get a sense of where you’re at.” He recommends that those partaking go “low and slow! . . . Give yourself two hours before you decide that you haven’t dosed effectively.” With a new dispensary opening soon on Mercer Street in Santa Fe and two others in the works, Goodman looks forward to bringing the benefits of Best Daze’s edibles and other products to new markets. He says, “Every single person who comes in the store on a regular basis is finding relief and benefit in their life. They have a card for a reason . . . and it’s pain, inflammation, and emotional discomfort due to whatever illness or condition. Cannabis helps.”

What could Industrial Hemp mean for New Mexico Agriculture? 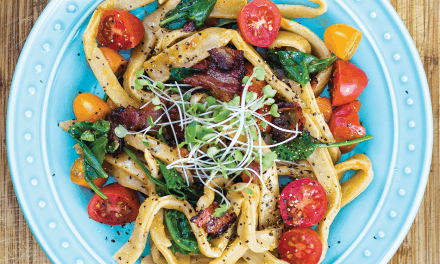 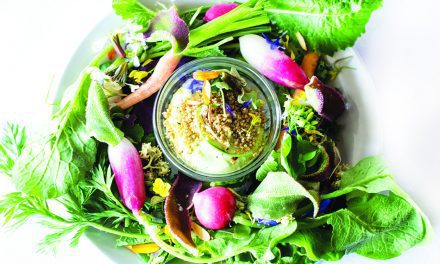 Inspiration from the Garden