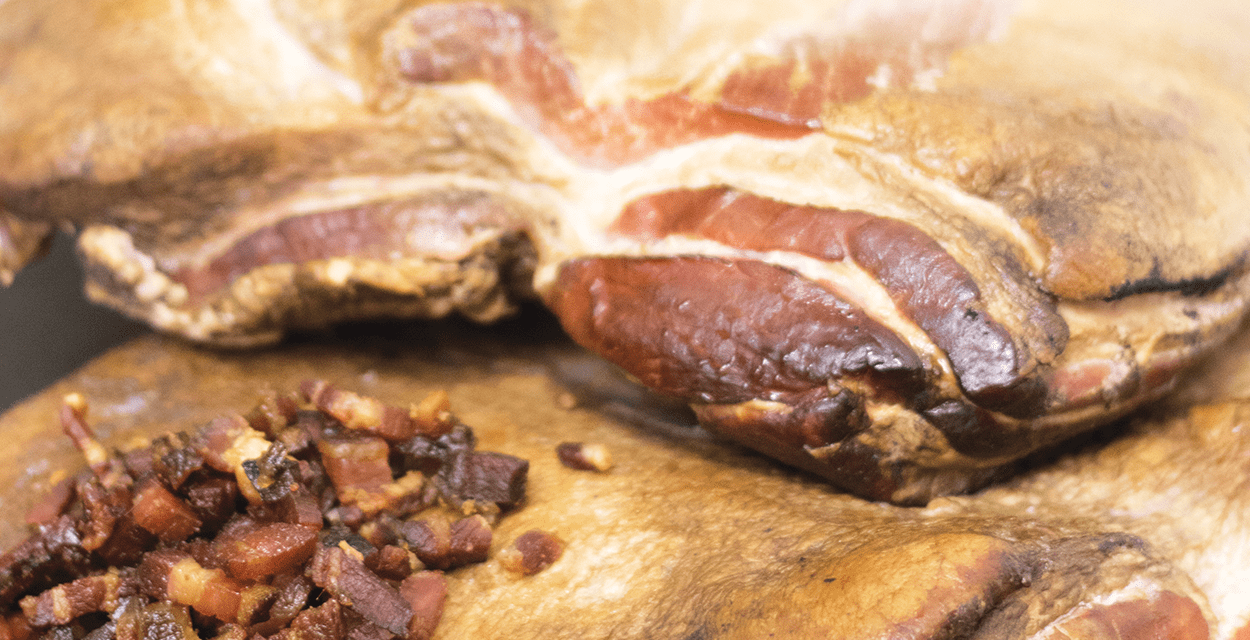 Kyzer Farm Has the Cure for the Common Pig 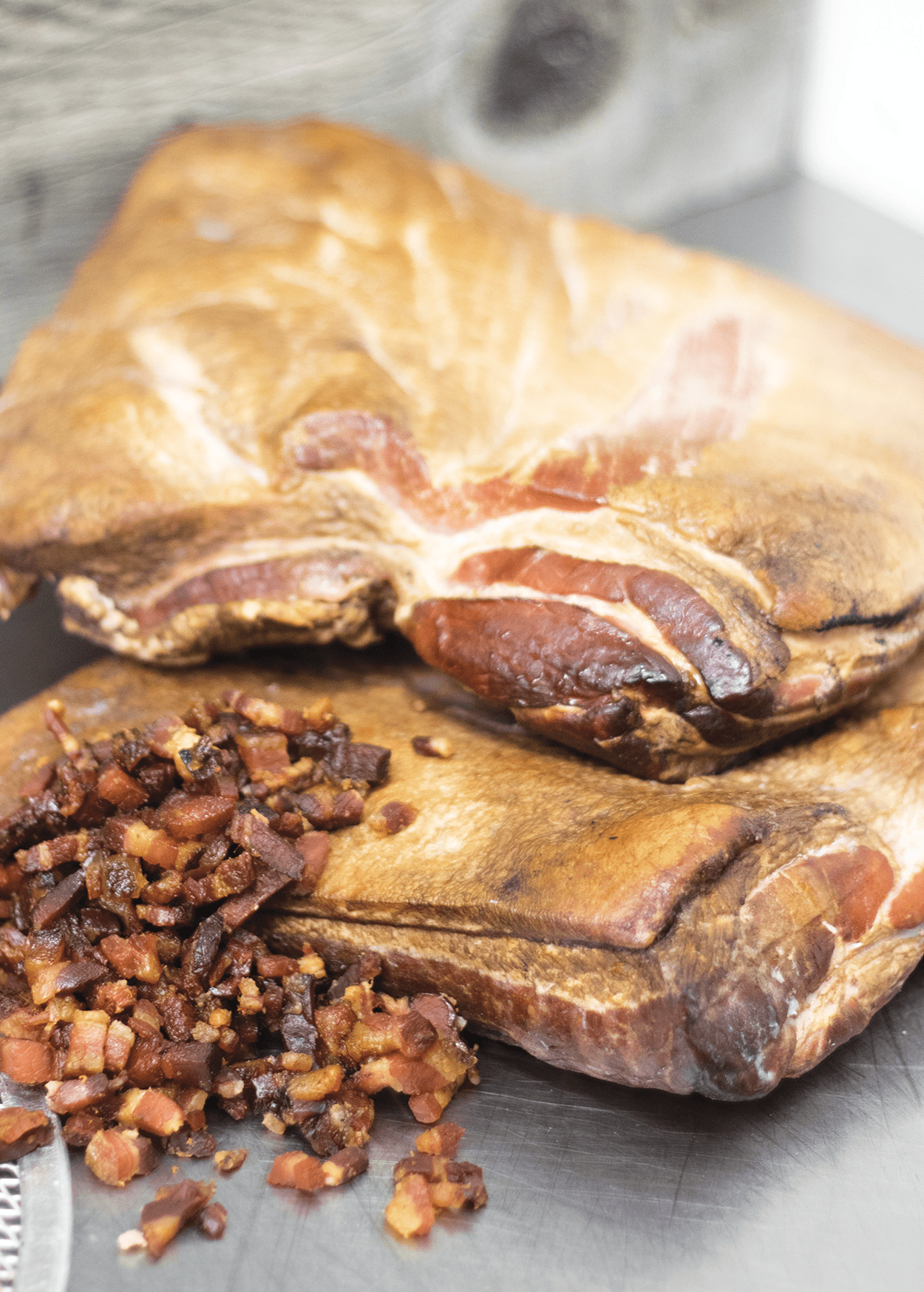 To find the story behind the meat portion of your breakfast plate, I visited Kyzer Farm, a short drive south of downtown Albuquerque, to meet with farmer Robert Kyzer and his delightful passel of pigs. I had never been to a pig farm before. What instantly struck me was how clean, bright, and happy the pigs looked in their ample outdoor yard, playfully cavorting out in the open or gathering gregariously around a water trough. I had to blink a few times; I thought for a second that the pigs were actually glowing. Kyzer, warm and welcoming, showed me around and discussed the ways he produces a superior pork product for the local market. “We mainly do a lot of natural farming. That’s pretty much the name of our game.”

He declared right from the outset, “Anybody can raise an animal; what we have is flavor.” I can definitely attest to that, having braised Kyzer pork belly at home, having eaten mouth-watering breakfast burritos with bacon and sausage made from Kyzer pork at Santa Fe’s Betterday Coffee more times than I can count, and having returned time and again for the tender barbeque Kyzer ribs at Fire and Hops. As we toured around the farm, Kyzer elaborated on the natural farming process that leads to this delicious result.

It begins with the mother. Farmers following standard industrial practices take the piglet off its mother at fifteen to twenty-five pounds. The weakened weaner then requires antibiotics to prevent disease and growth hormones to accelerate weight gain. Kyzer takes a different approach. He supports his sows throughout their natural lactation period by feeding them goat whey, which is rich in protein, amino acids, and probiotics that are passed on to the piglets through their milk. The piglets continue to feed on their mother until they are fifty to sixty pounds, and are only then weaned and brought out into the larger community.

Kyzer socializes pigs from several different mothers in communal yards, which makes for more mild-mannered animals. He also interacts with the pigs frequently, scratching behind their ears while talking and moving among them as he visits them on his thrice-daily rounds. On my visit, I had the pleasure of hanging out with the pigs while I spoke with Kyzer. The congenial critters nudged and nosed my ankles and sidled up against my legs. The playful interaction has a purpose beyond the feel-good; the communalism reduces stress and makes the meat taste better. The maxim might go: happy pigs make happy eaters.

Kyzer pointed to the giant feeder in the deeply bedded open air enclosure. “If you want to know the secret of what we do, I’ll tell you. It’s the feed. There’s nothing magical about it.” Kyzer Farm’s custom blend of feed includes assorted grains, a mineral supplement, and seed oils rich in amino acids and chlorophyll. Regional porcine delicacies such as sunflower seeds and peanuts complete the ration. These fatty, nutrient-dense treats add a rich nutty flavor to the meat. On this feed, Kyzer pigs gorge themselves voraciously and gain weight without any of the growth hormones or weight gain drugs common in commercial swineries. 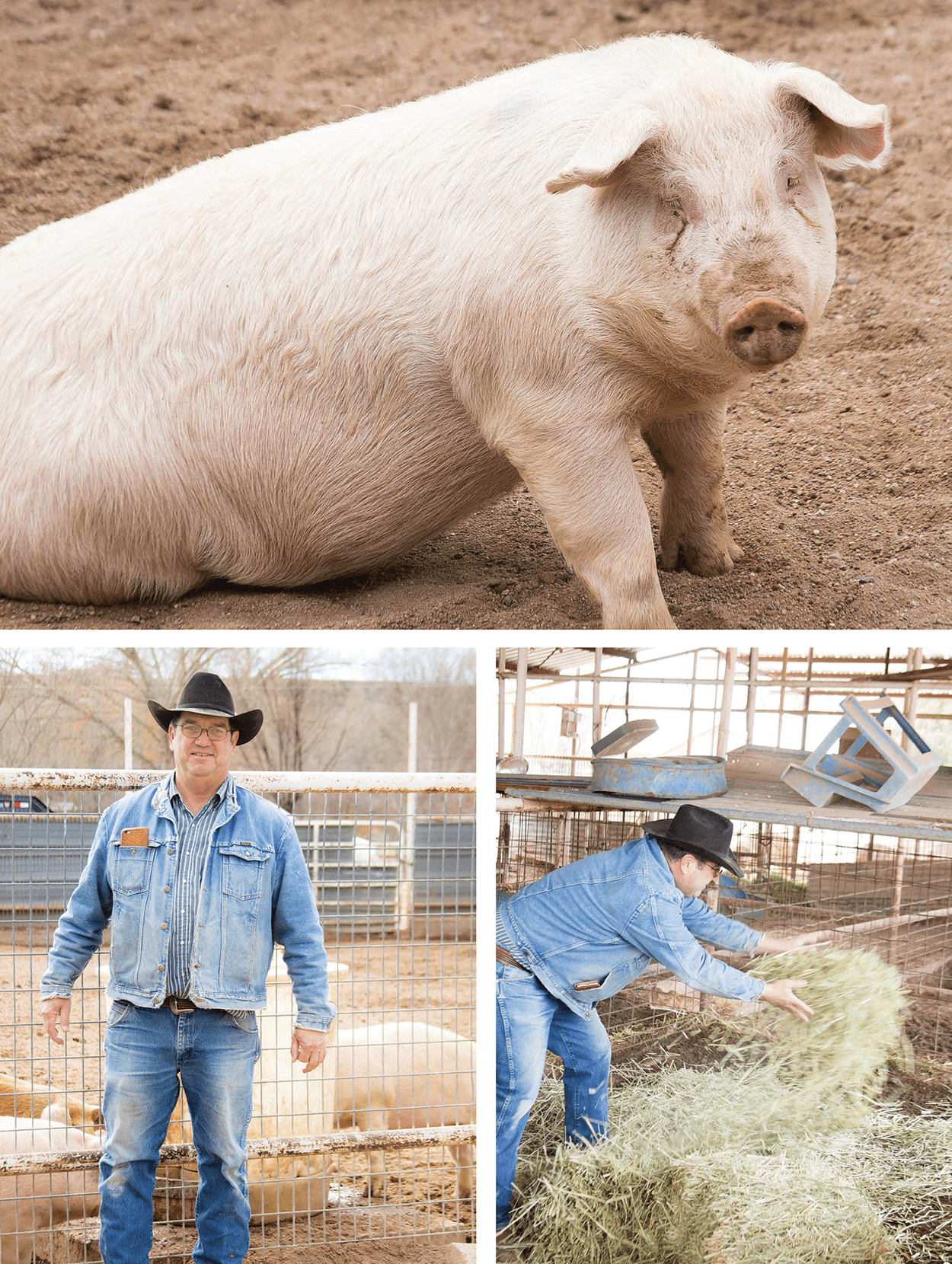 Kyzer Farm raises pigs from Hampshire, Duroc, Yorkshire, and Berkshire breeding lines, and they are developing their own crosses to exhibit the strengths and qualities of each of these traditional breeds, some of which are known for the quality of their lard, and others for the quality of their bacon. Kyzer told me that there are three hundred sows in the region that they partner with, each being kept on their premium blend of feed and care. Through this cooperative arrangement, they are able to mentor and support the next generation of farmers by setting them up with a sow and then buying the feeder pigs to take back to the home farm and grow to full size.

Since they started raising pigs twenty years ago, Kyzer Farm has sold whole hogs to individuals holding their own private matanza or traditional pig roast. In addition, La Montañita’s Cooperative Distribution Center (CDC) has been a consistent customer for the farm, both in its retail stores and through wholesale sales to restaurant customers. In recent years, as the farm-to-table movement in the area has continued to grow, Kyzer Farm has garnered a devoted cadre of chefs who feature Kyzer pork products on their menus, taking full advantage of the selection and availability of meat that the CDC reliably brokers to them.

I spoke with several local chefs who are proud proponents of Kyzer pork. Dru Ruebush of Radish and Rye observes, “One of the more noticeable differences between Kyzer pork and other products is the quality of the fat. With commercial pork, the fat tends to turn an off color when cooked, where Kyzer is extremely white. The color is not the only difference. The texture and flavor of the Kyzer fat is outstanding. We don’t cut the fat off our pork chops, and eating a bite of pure fat is difficult to distinguish from the meat, texture wise.” (Most commercial pork fat remains flaccid after cooking and has a terrible mouthfeel.) In addition to the bone-in pork chop, Radish and Rye uses pork belly, Kyzer green chile bratwurst, and pork bones.

Renée Fox from the Loyal Hound says, “We are willing to pay a little extra for the quality and care that goes into local meat production. I guarantee if you taste pork from the grocery store and Kyzer pork, it’s like night and day.” Loyal Hound uses Kyzer pork butt and ham, loin for schnitzel and chops, belly for braising and smoking, and ground pork.

Back at the breakfast table, I found Kyzer pork right beneath my own nose. It was, in fact, as I was sketching out my notes for this article, having a cup of coffee and eating a breakfast burrito, that I remembered that Betterday’s chef, Paul Novak, had said they use Kyzer pork for their bacon and sausage. I poked my head into the kitchen and asked for a tour. What I found was a direct expression of the local food process, where the best of the farm comes directly into the kitchen, and old-style culinary alchemy creates the familiar delicacies—in this case, bacon and sausage—that delight our palates anew. 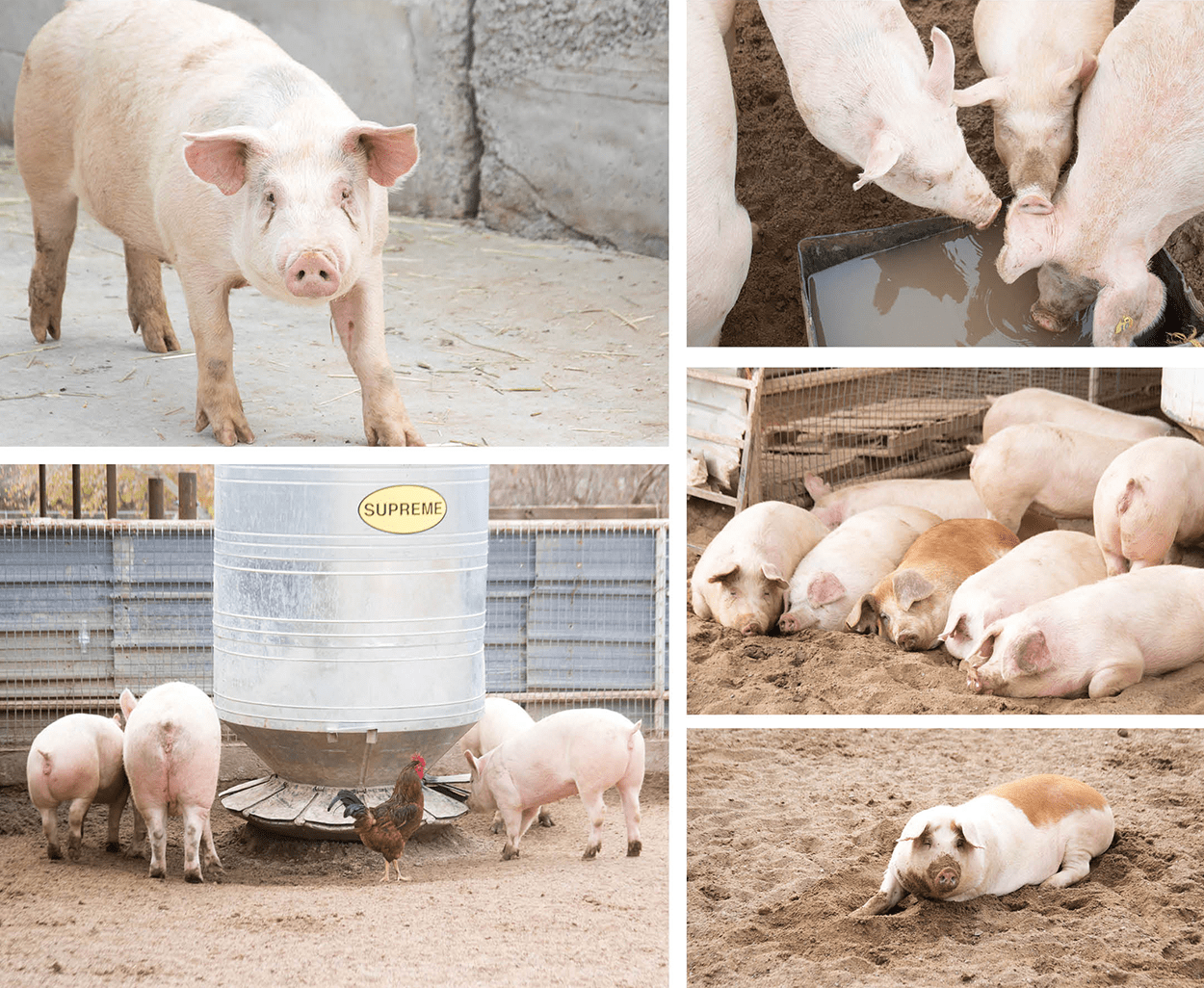 The owner of the Betterday, Tom Frost, passionately voiced his commitment to homemade food, locally sourced ingredients of the highest quality, and the foodways of the scratch kitchen. “The Betterday is a place where you can trust the food.” He expressed his appreciation for Kyzer, who had personally visited the coffee shop, and for the ways in which Kyzer has worked with the seasonal fluctuations of demand in the restaurant and provided a consistent and quality product year-round.

Chef Novak took me into the walk-in cooler where whole slabs of pork belly are brine-cured, before being air-dried and taken to the outdoor smoker where various fruit woods are used to smoke the meat. The bacon then rests before it is diced and cooked. Novak showed me a pile of bone-in pork shoulder, from which they carve the meat that is passed through a grinder, mixed with spices, and reground before being made into a delicious breakfast sausage. These breakfast meats, rolled into a fresh tortilla with organic eggs, potatoes, and house-made red and green chile, make for a breakfast burrito that had me addicted from the first bite. “The breakfast burrito is the place where we all, in Santa Fe, start our day,” says Frost. “We wanted to make a homemade one and make it accessible to all.”

The democratization of the farm-to-table movement is good for the farmer and good for the eaters. More and more, I have the feeling that certain things, at least, are right with the world when you can walk into your local coffee shop and know the provenance of the meat you are eating in your breakfast burrito.

Look for Kyzer Farm pork in La Montañita’s Co-op locations throughout the region and on the menus of fine restaurants from Albuquerque to Taos and beyond.

Look for the Betterday Kitchen, opening next to Betterday Coffee, in the Solana Center this month.

A Farm, A Ranch, A Refuge 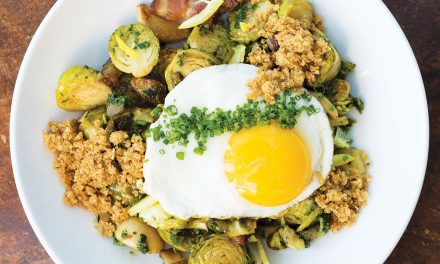 A Farmer’s Guide to Dining Out