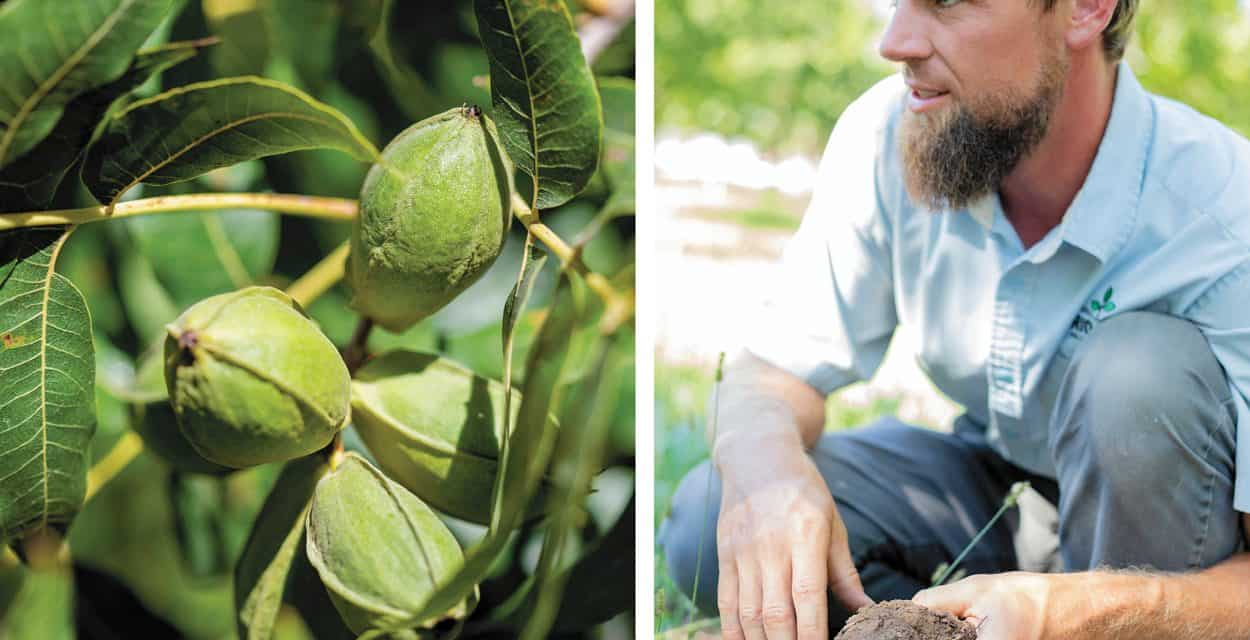 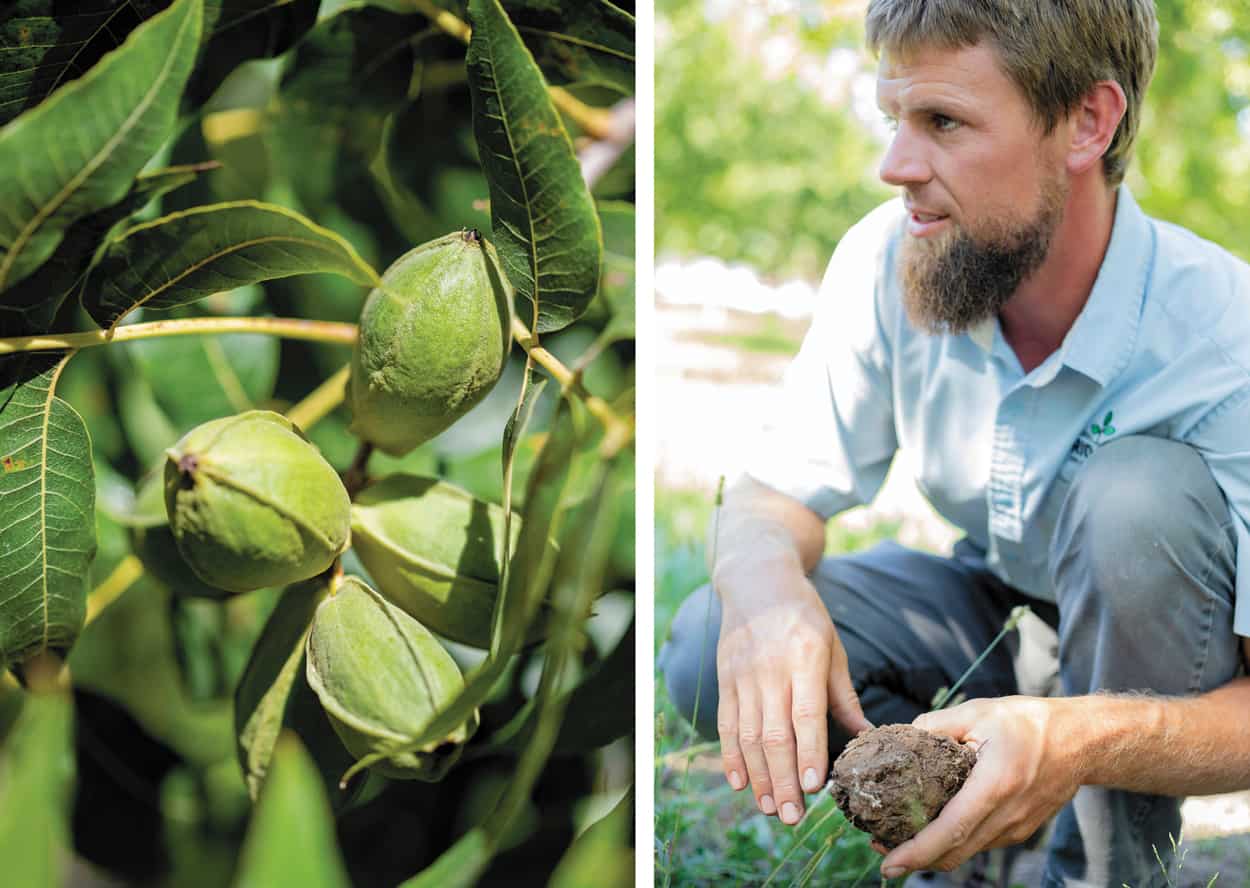 According to the 2019 New Mexico Agriculture Statistics Bulletin, the state ranked first in the US for sales of pecans as well as yield per acre. This included 45,000 acres of pecan trees that produced 33.3 percent of the national crop. Although Georgia’s net production has surpassed New Mexico’s for the past couple of years, pecans remain one of New Mexico’s leading crops. As anyone who lives in or has traveled through the region knows, most of this production takes place in Doña Ana County.

Based in Mesquite, Josh Bowman and his business partner, Wyatt Flory, of Rio Gro LLC, are among the pecan growers in the region. They’re also crop nutrition and soil health consultants who have been working with chile, onion, and pecan farmers in southern New Mexico since 2018. Today they estimate that their products and systems are in use across more than 10,000 acres of New Mexico farmland, with around 3,000 acres strictly implementing their program.

Rio Gro integrates regenerative agriculture into its 120-acre pecan orchard in Mesquite, practices loosely defined as helping to sequester carbon, improve soil quality, reduce erosion and runoff, and generally promote more sustainable growing. When asked why he emphasizes the term “regenerative agriculture,” Bowman says that he’d previously used the term “sustainable agriculture,” but has come to realize that “it’s about more than just sustaining because it truly is doing something new.”

“Sustainable is just kind of maintaining what you have,” he explains. “Regenerative is improving it.”

By introducing the methodologies of reduced tillage, livestock grazing, cover cropping, and soil inoculants, Rio Gro has created a model that proves the efficacy and benefits of regenerative agriculture. Instead of spraying herbicides and tilling to suppress weeds, Bowman and Flory plant seasonal cover crops of grasses, legumes, broadleaves, and brassicas. From April to August, the equivalent of 250 head of sheep and about 50 cows graze the pecan orchard. But according to Bowman, “The earthworms are the primary factors to changing the soil. When this process begins, you’ll see earthworm streaks throughout your soils. Earthworms, of course, love the environment that cover crops create.”

Looking at an orchard floor filled with cover crops, one might wonder how pecans—typically shaken from trees and collected from the ground—can be harvested there. Bowman explains that the crops are mown in late summer, and, due to the subsurface microbial activity, the remaining residues begin to break down within forty-five days. He’s also noticed a lot of other growers in the region implementing some form of cover cropping.

To demonstrate the visible benefits of regenerative agriculture, Bowman showed me a soil sample from his orchard. Dense subsurface mycorrhizae had formed along the roots of pecan shrubs, and earthworms were present in the previously sandy, inactive soil. The soil activity, he says, resulted from a monthly application of vermicompost teas, which contain mycorrhizal inoculants plus thirty thousand other strains of bacteria and fungi. As for its application rates, he says, “A lot of people say inoculate mycorrhizae once in a lifetime, or inoculate once and you’re good. Well, we’re not stopping.”

Bowman and Flory often refer to their approach as “crop nutrition,” and it’s safe to say that their orchard enjoys a healthy diet. That diet consists of a fresh vermicompost tea containing fungal bacterial recycling organisms, fish fertilizer as the primary source of NPK (nitrogen, phosphorus, and potassium), and an occasional zinc foliar spray for pest control. Most pecan producers rely heavily on zinc applications because pecan trees are susceptible to zinc deficiencies. In contrast, over the years Rio Gro has noticed that zinc levels in their soils are climbing due to the biological and organic matter. “If you raise your organic matter levels and increase your biological inputs in a sustainable regenerative system,” Bowman suggests, “you will see microelements go up substantially without even applying them.”

For irrigation, Rio Gro draws from a pond holding 1.75 million gallons of water captured from the Rio Grande during the Elephant Butte Irrigation District’s water distribution season. Pumping this water through their sprinklers increases the overall distribution and subsequent carbon sinking potential of the orchard while also reducing the water evaporative rate.

From an environmental and sustainability perspective, Rio Gro has taken many successful steps to address the climate-related changes (and the associated consequences) that growers are experiencing. However, the challenge has not been in selling sustainable practices from an environmental or ethical standpoint, but in demonstrating the financial wisdom of investing in systems and infrastructure that might take decades to yield a financial return. One of Rio Gro’s goals is to produce a consistent yield every year, and already they have found their yields do not fluctuate like those of most pecan farms. According to Bowman, their yields might vary 15 percent while those using conventional methods may see a rate of 50 percent or more.

Bowman believes that managing tree health with regenerative methods makes it possible to avoid on-and-off cycles of production. Let’s hope Rio Gro’s commitment to regenerative systems—and their proven success—continue to have a positive impact and influence on the agricultural community in southern New Mexico. 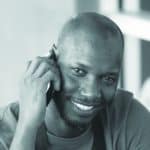 Shahid Mustafa owns and runs Taylor Hood Farms, practicing regenerative organic agriculture on more than three acres in El Paso, Texas, and offering a CSA with home delivery. Through his nonprofit organization DYGUP/Sustain (DYGUP stands for Developing Youth from the Ground Up), he has worked with the science department at Las Cruces High School to implement an environmental literacy curriculum and establish a one-acre plot where students receive credit for helping with all stages of vegetable production. With plans to become a certified organic farm and train a new generation of farmers, he hopes his efforts will be an inspiration for farmers to adopt the regenerative organic practice. 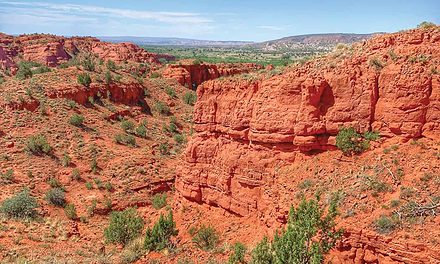 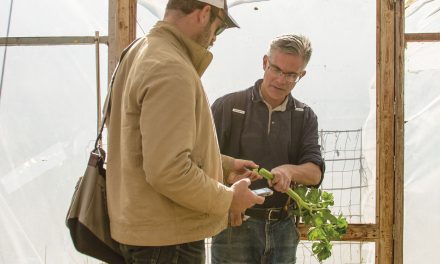 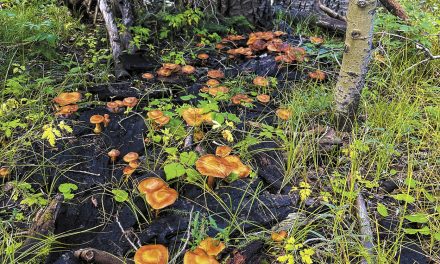 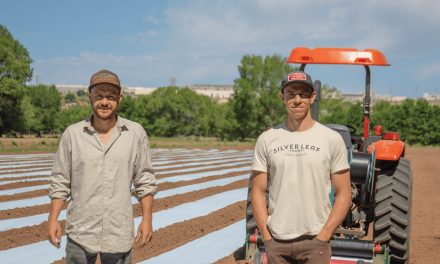