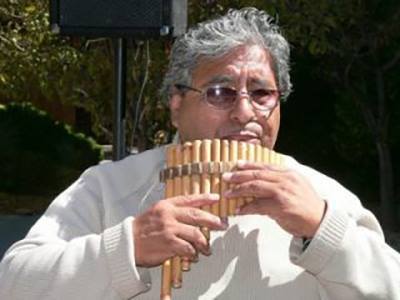 If you love the sound of Andean flute (pan pipes), which many people associate with street musicians, you’re in for a treat. Mario Reynolds brings a polished professional sound to his sweet Andean ballads, accompanying himself on pipes as he plays the guitar.

Originally from Cochabamba, Bolivia—birthplace of the Andean love ballad—Mario Reynolds got his start in Santa Fe playing pan pipes on the streets. In the two decades since, he has made a life for himself in the high deserts of North America as a music teacher and performer, recording multiple CDs. We were introduced to him at La Fonda when he played La Plazuela and the Bell Tower, where his instrumentals made the perfect finish to an evening in Santa Fe.

Now playing at La Fiesta Lounge, Reynolds says he will include both traditional folk music and more contemporary Latin sounds in his mix. Elsewhere, with his Trio Latino, he plays everything from boleros to rancheros, accompanied by accordion and vocals, so his solo act has become a fusion of familiar and exotic sounds. “It’s very beautiful,” he said simply of the relatively new experience of playing at La Fiesta Lounge. Audiences “really appreciate the music.”