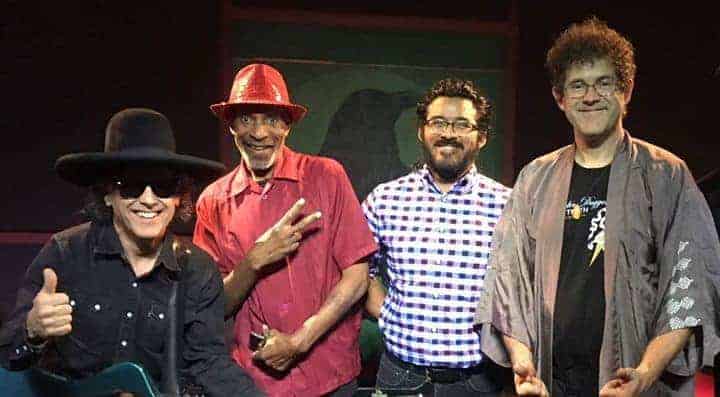 Whichever song it is that gets you rockin’ that boogie, Little Leroy and His Pack of Lies is going to blast it out in the course of the evening—or they’ll take requests printed neatly on a picture of Jackson, Franklin, or Grant. A hijinks party band, Murali Levine and his crew specialize in good-natured ribbing.

The set list says it all, from Rolling Stones to Pink Floyd, James Brown to Jimi Hendrix. Between numbers, the lead guitarist in the funny hats carries on with his rhythm guitarist, “Jake the Snake” Jones, bassist Don Juan, and drummer Boom Boom. That’s not to say they don’t have their musical chops. Levine’s CD Enjoying a Life won a New Mexico Music Award in 2011, and is available on iTunes.

“The band is always learning new songs, so our show doesn’t get old,” says Levine, aka Little Leroy. “We do a fine mix of original and cover songs spanning 70 years of dance music. We remain focused on giving our audience a show they’ll enjoy and remember.” They also don’t take themselves too seriously, according to their web page with the tag line “Bad-Ass Dance Music & Rock N Roll Comedy.”

Levine says the band loves performing at La Fonda. “We’re always amazed and delighted to find people from so many different places around America and the world stopping in our little City Different and enjoying La Fiesta Lounge,”